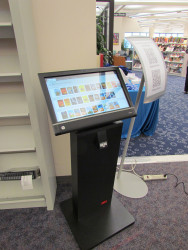 3M’s library division has been bought by Bibliotheca, a company that describes itself as “the largest global company dedicated to the development, deployment, and support of self-service library solutions”.

The terms of the deal have not been disclosed, but the press release does mention that today’s deal covers the purchase of 3M Library Systems’ North American business, and includes agreements to buy the international business as well.

The division was generating over $100 million a year in revenue at the time of the sale. It employed around 100 people, all of whom will be transferring to the new owner. From the Star-Tribune:

As respects the sale of 3M’s library system business, One Equity will gain a global business that lets library patrons check out books at self-serve kiosks and over a cloud-based lending service.

The system also gave patrons access to thousands of digital library books that could be downloaded to a tablet, cellphone or computer. The division also provided libraries with radio frequency identification (RFID) technology that read book security tags and helped libraries with circulation, inventory, security and customer service functions.

In addition to selling library equipment and tech that patrons usually never see, 3M Library Systems is also the home of the 3M Cloud Library. This is one of the smaller competitors to OverDrive, and it counts several hundred libraries as partners, mainly in the US.

According to the press release, the service will continue unabated (although it will likely get a new name in the long run).