As I predicted last week, B&N’s new tablet is the Samsung Galaxy Tab E Nook 9.6″ Tablet. The retailer has just sent out a press release email, announcing that the new tablet is available now for $249 (less if you take B&N up on its trade-in offer).

The Samsung Galaxy Tab E Nook sports a 9.6″ screen, just like earlier spec sheets said, but it’s not quite the tablet I lead you to expect. While many of the details I reported last week are correct, B&N is showing that the new tablet runs on a Qualcomm CPU, and not the cheaper Spreadtrum CPU used in previous variations of the Samsung Galaxy Tab E. 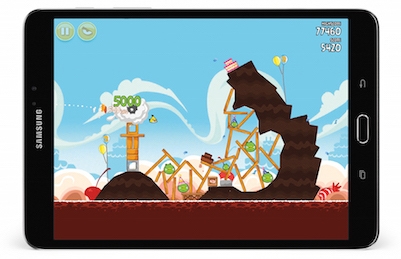 This tablet has Wifi, GPS, and an accelerometer. According to B&N it weighs 547 grams, and comes with a battery which specced for up to 12 hours of video.

B&N hasn’t stated the amount of RAM, dimensions, battery spec, or whether the tablet has Bluetooth, but aside from that this is a better model than the unit I detailed last week.

It runs the same Samsung-flavored Android with a dash of B&N mixed in on much better hardware than I was expecting. It costs only $5 more than the Fire HD 10, it’s most visible competition, and bests that tablet in the CPU and OS categories.

That "Cache" of Mark Twain Writings Wasn’t a Cache, Nor Was it Recently Uncovered

"plus 128GB microSD card support"
How do you figure that? If it supports 128GB, then that means it is compatible with microSDXC cards. This means a 200GB microSDXC card (the largest currently available) would work. Theoretically: in a few years when a 2TB microSDXC card is released it should work too.

That’s probably true, but I’m only going to repeat what B&N states.

The microSDXC hardware spec is capable of up to 2TB cards, but the software for the tablet may not be able to read them. Manufacturers generally list the highest capacity they’ve tested with it. Anything above that may or may not work.

Maybe once they’ve run out of Samsung merchandise to re-sell, they’ll actually get around to releasing a new e-reader. Maybe.

Do you have any examples of devices that can read 64GB but not 128GB, or 128GB but not 200GB?
I thought SDXC support was all in the software anyways. For example I believe a 10 year old laptop can work with SDXC cards as long as it’s OS has support for exFAT.
I admit I’m not an expert, but I don’t see how/why they would implement SDXC in such a way that only certain sizes work. If you buy a camera it would just say SDXC compatible, and you would assume it works with the latest (512GB) SDXC card.

I have an example. My digital audio player and my cd player both support usb drives but they have a limit based on the number of files that the firmware can read. Tablets and ereaders are not laptops. They don’t run completely full featured broadly supported OSs like laptops do. They might feasibly have software limits on storage similar to those audio devices.

The multicore Geekbench scores for the new Nook’s and the new Fire are comparable. Why do you think the Nook "bests that tablet in the CPU…" I agree that Android 5.1 beats Amazon’s forked version of an earlier version Android.

B&N is currently running a trade-in program – $50 for old Nooks and more for some things.

The full specs are at http://www.samsung.com/us/mobile/galaxy-tab/SM-T560NZKUBNN.

[…] You can buy the reader here if you want.via Digital Reader […]