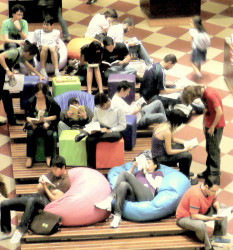 Whether it’s similar-sounding words with conflicting definitions, or word-pairs with contradictory usage (EX: recite at a play vs play at a recital), English is a confusing language. I think James Nicoll said it best:

The problem with defending the purity of the English language is that English is about as pure as a cribhouse whore. We don’t just borrow words; on occasion, English has pursued other languages down alleyways to beat them unconscious and rifle their pockets for new vocabulary. (James Nicoll)

That rifling of pockets for new vocabulary would certainly explain the confusion over pronunciation.

The Daily Mail brings us news of a recent survey conducted by Audible. The audiobook distributor surveyed 2,000 people and asked them to pronounce the names of certain fictional characters. And as you would expect, a lot of the survey participants had trouble with names that they had only seen in print (but they might never had heard spoken aloud).

Oedipus, Daenerys Targaryen, and Don Quixote topped a list of literary names that the respondents struggled to say correctly:

Considered to be one of literature’s greatest ever works, Don Quixote proves to be a difficult name to get right as it was voted the number one most commonly mispronounced name by 44% of those surveyed.

Daenerys Targaryen, one of the lead characters from hit book and TV series Game of Thrones, came second in the poll with 28 per cent identifying it as the most commonly mispronounced name.

And Oedipus, from ancient Greek writer Sophocles, came in at number three with 23 per cent choosing it as the most difficult name to say properly.

Also in the top ten are Hermione from the Harry Potter books, Beowulf, Smaug from The Hobbit, Violet Beauregarde from Charlie and the Chocolate Factory and Piscine Patel from Life of Pi.

You can find a list of the top ten most confusing names at the end of the post, though at least one of the names on this list arguably shouldn’t be included.

Voldemort should not be on this list. It ranked as the 8th most mispronounced name, with 12% not knowing that the final “t” is silent, but there’s a good reason that they didn’t know.

While the author may have recently declared the proper pronunciation for Voldemort as ending with a silent “t”, that name was pronounced with a hard “t” in the Harry Potter movies:

That may not be canonical in the view point of a purist, but it did set the rule for the pronunciation. As Laurence Howell, director of Audible UK, said: “‘Listening to the audiobook performed by a professional narrator gives you the advantage of hearing the names as the author intended.”

In the case of Harry Potter, we have the authorized movies to tell us how to pronounce the names, and Voldemort does not have a silent “t”.

But other words do have silent letters, which was a problem for some respondents. The survey found that 29% of the survey participants were tripped up by names with silent letters. Over a third of the respondents agreed that certain names are simply difficult to say, while another 16% attributed their errors to hearing someone else use an incorrect pronunciation.

We don’t know how many point out the mispronunciations of others, but a quarter did say that mispronouncing a name left them feeling embarrassed.