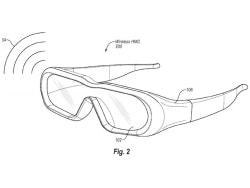 Between the Echo, Dash Button, and the Dash, Amazon is no stranger to novel gadgetry, and here’s one that could be turned into an ereading device.

Re/code has the scoop on a patent that describes Amazon’s take on augmented reality goggles like the Magic Leap or Sony Smart Glasses.

The patent explains how the smart glasses might be wired or wirelessly connected to a device such as a tablet and display video or images from that device in front of the wearer’s eyes. Tapping on the tablet, it explains, transitions a surface in the display from opaque to transparent, making it possible to interact with the real world without taking the glasses off.

“On the one hand, a large screen is beneficial for watching movies, playing games and even reading email comfortably,” reads the patent. It continues: “On the other hand, the larger the screen, the bigger the device, which may be less desirable for a light and portable product. Another problem consumers experience with portable devices, like tablet devices, is the lack of ability to immerse themselves in a tablet experience, such as watching a movie on an airplane.”

Basically Amazon has a patent on a pair of glasses so smart that they can either block out the world around you or be transparent and let you see the display’s contents superimposed over the real world surroundings.

To be clear, the patent describes the glasses as a new form of display for video, but it also suggests that the same tech could be used as a HUD for displaying info (think Google Glass), or it might be used for augmented reality uses (like the Magic Leap or MS HoloLens).

But I wouldn’t expect to see it any time soon. Rather than release a commercial product, Amazon filed for the patent. That tells us that they’re interested in the tech and that they think it could be valuable one day – it’s just not ready yet.

And given the indefinite status of Magic Leap, the hottest player in this niche, that’s no surprise. This firm raised half a billion last fall to fund the development of cutting edge augmented reality tech very similar to the Amazon goggles mentioned above, but no one knows when it be on store shelves. According to the latest details shared earlier this week when the company announced it was shifting operations to CA,  Magic Leap isn’t saying when they will launch their first product (it is filing a lot of patents, however).

And so I wouldn’t expect to be reading your Kindle ebooks on the Amazon Embers any time soon.