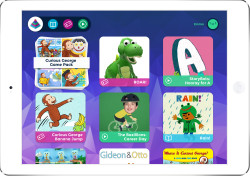 Evidently pleased with its experiences in Scribd and Oyster, Houghton Mifflin Harcourt has launched its own competitor to kid-focused subscription services Amazon Freetime Unlimited and Epic.

Curious World is a $10 a month service that offers fun but educational content, including games, ebooks, and videos. it’s launching with over 500 pieces of content in the library, which HMH promises to expand on a weekly basis with around 5 to 10 new videos, games, and ebooks. They also say that they’ll retire some of the content to keep the selection fresh.

Although by description alone, the app sounds like it might not be as fun as, say, watching an episode of Spongebob Squarepants, the publisher has smartly leaned on its own library in order to fill Curious World with authors, brands, and characters most kids already know of and love, and combined that with acquired content. For example, the e-books section includes Gossie and Curious George, among other acquired titles.

Edit: A reader has reminded me that back in August HMH bought assets from MeeGenius, a similar subscription service. Thanks, Eric!

Curious World has a much more limited selection than Amazon Freetime Unlimited, which is both cheaper and boasts 8,000 items in its catalog. Of course, AFU is only available on Amazon hardware, but that isn’t really a problem given the $50 Fire tablet (and the fact that many parents are probably thinking of getting their kid a tablet).

And frankly, at ten dollars a month Curious World is pretty expensive. And just to give you an idea of how expensive: Fuhu will lease a tablet for that price, and they’ll throw in the Nabi Pass content subscription service for no extra cost.

So while I admire HMH for the attempt, I can’t recommend that parents sign up.