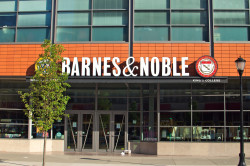 Late last week Barron’s published one financial analyst’s take on B&N Education, the college bookstore division that was spun off of B&N earlier this year.

B&N Edu operates about 740 college bookstores  in the US, and that analyst thinks that it is under-valued by half. But his article is behind a paywall, so I hadn’t been able to read it. Luckily a reader has helped me figure out that the paywall is porous and could be bypassed through Google (thanks, K!) so I now have the text of the article and am ready to respond.

When I first expressed interest in the article last night, I jokingly asked whether its author was aware of an invention called the internet. It turns out my joke wasn’t too far off base.

Here is why Andrew Bary thinks that B&N Edu is under-valued:

“It’s an attractive business with high barriers to entry because of the physical presence on college campuses and an early movement into the digital space,” says Alex Fuhrman, an analyst with Craig-Hallum Capital Group. He sees “store growth, same-store-sales growth, and margin expansion” ahead. He has a Buy rating on the stock and a $25 price target.

The company is bite-size by retail standards, with a market value of $600 million and revenues of $1.8 billion in its latest fiscal year ended in April. The company had a debt-free balance sheet with $16 million of cash on Aug. 1.

It is inexpensively valued at six times this fiscal year’s expected pretax cash flow (earnings before interest, taxes, depreciation, and amortization) of $92 million. The cash flow is depressed by a projected $26 million of annual spending on Yuzu, its venture into the nascent digital-textbook market. Yuzu is also depressing reported earnings, which could total about 45 cents a share in the current fiscal year ending in April 2016.

Barnes & Noble Education operates bookstores on 736 college and university campuses around the country, including those at Harvard, Yale, University of Pennsylvania, Clemson, the University of Michigan, and Texas A&M. And there’s plenty of room for growth, since about half of all college bookstores—including UCLA, Princeton, and Wisconsin—are still operated in-house. “We have a low-risk and steady business model and large upside for growth,” says CEO Max Roberts.

THE STORES OFTEN HAVE A NEAR-MONOPOLY POSITION on campuses, offering textbook sales and rentals, collegiate apparel, and related gear, food, and convenience goods. Collegiate gear accounts for over 25% of sales and is quite profitable. The company is No. 2 in the industry behind the privately owned Follett, which operates over 1,000 stores.

I will grant you that the financial details look good right now, but I would also remind you that Nook Media looked great when it was first spun off. And where is it now?

And as for the description of B&N Edu’s position on college campuses, “near-monopoly”? “high barriers to entry”?

These guys don’t know what they’re talking about.

In part its because college mail rooms are being inundated by packages from Amazon, but also because Amazon is picking up sales at the expense of college bookstores.

Some, like the bookstore at Fredonia University, are only seeing a slight drop, while others like the University of Hawaii bookstore reported a decline of several percent YoY.

As I reported in February, the universities that partnered with Amazon also reported a decline in bookstore revenues. Even the NACS (national Association of College Stores) has said that this market peaked in 2010. And that estimate is born out by B&N’s own annual statements.

The retailer reported that revenues for its college bookstore division declined in two of the last 3 fiscal years (2012, 2013, 2014). This, while B&N was signing new contracts to operate additional stores.

Brick and mortar college bookstores are facing stiff competition not just from Amazon but also from retailers like Newegg, which recently announced it was getting aggressive in the college textbook market. And let’s not forget eCampus, which runs 150 virtual bookstores for colleges and high schools, including one for the University of Wisconsin Milwaukee.

And that’s why, folks, when someone tells me that B&N Edu has great prospects, I want to step back and measure the size of their shovel.

While I am not saying that the company is doomed, I do have deep concerns about its prospects. If it successfully shifts more sales online, then it could do well. But if B&N Edu makes the same mistakes as the analysts mentioned above, it will not.