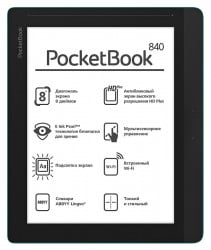 Pocketbook’s 8″ Inkpad ereader was one of the high points of 2014 when it was released late last year. This is a great ereader but it never sold well nor has it gotten much support from Pocketbook.

A little over a month ago am Inkpad owner revealed over on MobileRead that Pocketbook is working on a firmware update. That update is still only a beta release, but I for one have grown tired of waiting for six months for the official release so I installed the update last night.

You can download the update from Pocketbook. It’s a 153MB ZIP file.

To install the update, unZIP the ZIP file to get two files. Copy both to the system folder on your 840.

After they are copied, open the settings menu and go to the software menu. (And if you don’t see software as one of the options in the settings menu, check in the about menu.) You should see an option to check for a firmware update. Click it, and the Inkpad should find the update and install it for you.

It worked for me.

The new firmware has a few quirks (the frontlight doesn’t automatically turn off when the InkPad is put to sleep) but all in all it works well.  The Inkpad takes a little long to open an ebook, but the page turn speed is just about the same as on my Paperwhite (2013).

And I really like the notifications that prompt me to set up Pocketbook’s cloud services (email delivery, storage, synchronization). I’ve never used those services, but I’m tempted to run a few tests and see if the services will run in the background (that would be very useful).

So while this may be a beta release, I think it is worth installing.