When Amazon launched an affiliate program for indie booksellers in 2013, many booksellers responded with screams of outrage, furious that Amazon would dare to try to recruit them to sell Kindles.

The reactions to the launch of Amazon Books earlier this week were, for the most part, considerably less hostile and more curious about what might happen next. Geekwire, The Bookseller, and The New Republic all sought the opinions of booksellers, and TNR even went so far as to ask an ex-bookseller (and ex-Melville House staffer) to pen their coverage. 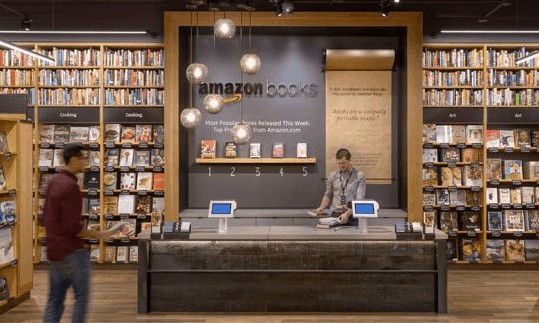 Some are afraid of where this trend might go. Emma Corfield Walters from indie bookstore Bookish told The Bookseller: “I would be absolutely horrified if it opened in London. I would be worried about it. If they’re able to harness that massive buying power they have and bring it to the high street…  I don’t know if it would wipe out small town bookshops, but certainly bookshops in big cities.”

Henry Layte of the UK-based The Book Hive described the launch as “a bit depressing” but not surprising. “I think it was inevitable,” he said. “I’d wait and see what happens, and if it happens over here… Yeah, it’s a bit depressing. But not a surprise. It wouldn’t worry me because they wouldn’t do it where I am [in Norwich], they’d do it in London, but it’s just depressing. No one likes them so no one wants to see them taking over other territories of the market that aren’t theirs. It’s just a bit bleak, isn’t it?”

Others are considerably more positive. Helen Stanton from Forum Books told The Bookseller that: “I think the way independent bookselling is strong, maybe it’s something [Amazon] hadn’t explored and wanted to for themselves…it’s almost a form of flattery. We’re doing something right as independents. That the big corporations are doing what I’m doing – it’s not quite reassuring but it almost [proof of] that you’re on the right lines.”

And then there’s Dustin Kurtz, formerly of Melville House, who faulted Amazon in a post-modern hipsterish kind of way for being a pleasant but ordinary bookstore. “Amazon Books—like the surrounding mall—feels like it’s predicated on anxiety. Its very existence may be meant as an answer to anxieties within the company about a persistent inability to overcome the question of ‘discovery,’ both for Amazon Publishing titles and in general—the company remains dependent on consumers finding products they’re interested elsewhere and then buying them, presumably at a discount, from Amazon.com, he wrote for The New Republic. “But other anxieties dictated what the store was allowed to become. The store is aggressively inoffensive. It is nice only insofar as it is bland and has good lighting and they let a customer take his pretty chill dog in.”

Some booksellers, like Bill Virgin, co-owner of Burien, Wash.-based Page 2 Books, don’t seem to grasp that Amazon is trying to compete locally, or the impact of Amazon paying a premium to hire staff away from the competition.

“We can do some things Amazon can’t, like serve our local customer base — since Burien and U-Village are a long ways apart, that’s one reason why this isn’t a huge threat,” Virgin told Geekwire. “We do work with some authors on national and even international sales, but we do a lot of work on hosting local and first-time authors who would get lost and unnoticed on Amazon. We’re also heavily involved with local schools and in community events, all as part of our own strategy to build a loyal and local core of customers.”

Except that the booksellers at Amazon Books are all local, and thus are capable of serving the local market. In fact, Amazon has even suggested that would be the case when they said that the stock would be curated by the staff.

Also, we already know that some of the books stocked in Amazon Books are highly rated but under-selling gems, books which “would get lost and unnoticed on Amazon”.

But Amazon is only stocking 5,000 titles, leading another bookseller to wonder how that would impact customer behavior.

Robert Sindelar, managing partner of independent Third Place Books, notes that a lot of his customers are seeking a specific title.

“They want the immediate gratification of, ‘I came here to get this, I want this now,’” Sindelar explained. “They know that if they’re ultimately just ordering something to be mailed to their house, they can do that whenever. It will be interesting to see if customers act differently in an Amazon store than they would in a different store.”

That is something I would like to see as well. With its next-day (if not faster) delivery, Amazon already has instant gratification almost solved; how will customers respond when they’re in a store where the book they want is easier to get (and faster) through the store’s app than the physical location?