Amazon has gone public with a new security measure this week.

Engadget reports that Amazon is now offering the option of two-factor authorization:

Relying solely on passwords to secure important accounts may be outdated, but until they’re gone for good your best alternative is locking things down with two-factor authentication: Amazon. Considering you probably already have a credit card or other payment info stored there, it just makes sense to add an extra layer of security that makes sure it’s really you logging in. The only problem? Until recently Amazon didn’t have any option to support the feature, but now it does. I noticed the new option while updating my password last night (also a good security idea), and one of the engineers told me it launched a couple of weeks ago after a private beta.

For those not familiar with the term, two-factor authentication is a type of security measure where you first log in with your password and username, and then type in a security code which is usually sent to you by email or SMS (Paypal used to give out keyfobs which would generate a code you could enter).

You can find out more at Amazon.

It’s worth looking into, because chances are we’re going to see this with the Kindle apps at some point (as well as Amazon’s other apps). I know this because I’ve already encountered two-factor authorization while registering a Kindle app.

In early July I was doing some housekeeping with my Kindle account. After deregistering nearly all the dozens of Kindle apps in my account, I opened the Kindle4PC app and tried to register it.

I was unable to do so, and the app did not explain why. It was only after I opened Gmail so I could go complain to Amazon that I realized Amazon had already sent me this email: 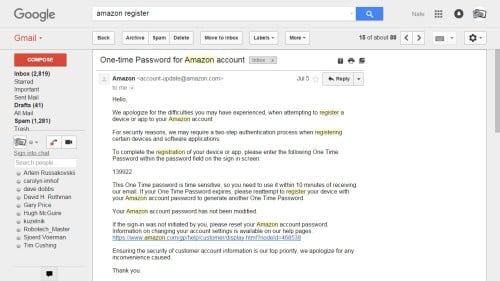 Given that the app didn’t inform me that I had to jump through an additional hoop, and that I had not signed up for the increased security, I was terribly surprised to see the email.

And I bet I won’t be the last to get this rude shock.

So if you have an inexplicable inability to log in to your Kindle app, this could be the reason why.