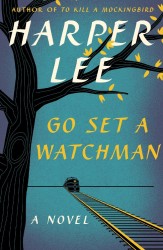 Barnes & Noble’s second annual signed first editions program got a shot in the arm today – a very expensive one.

The NYTimes reports, and I can confirm, that HarperCollins has published a leatherbound edition of Go Set a Watchman.

Now, Ms. Lee’s publisher, HarperCollins, is angling for another commercial hit, on a much smaller scale but at a much higher price. On Wednesday, the publisher announced that a $1,500 limited edition of “Go Set a Watchman,” signed by the author, is on sale at retailers across the country, just in time for the holiday shopping rush. HarperCollins printed just 500 copies of the collectors’ edition, which includes a leather-bound book with gold gilded edges and a velvet-lined cloth box.

According to the NYTimes, Lee didn’t sign the books.  Instead she signed sheets of paper which were then bound into the books by HarperCollins.

A reader tipped me to the news that you can buy one at Barnes & Noble, but I haven’t found another retailer with the in stock. (Thanks, Steve, for the tip!)

With just 500 copies, the limited edition of Watchman could well be snapped up by collectors, or at least that is what Adina Cohen, a partner at NYC-based Argosy Book Store, thinks. (Her store has an unsigned first edition of To Kill a Mockingbird with the original dust jacket for sale for $11,000.)

“I bet it sells out very quickly,” Ms. Cohen told the NYTimes. “That’s a very reasonable price, because she’s so collected, and it’s amazing that she’s still alive.”

She could be right, but I wouldn’t bet on this being the last set of signed editions. By releasing the rough draft of Mockingbird as a “new” novel, HarperCollins has shown that it’s not above exploiting an elderly and infirm author. Lee had a stroke in 2007, and she’s now mostly blind and deaf.

When Watchman was announced last year, there were several reports which questioned just how much Lee still understood about what was going on around her, and whether she understood that her draft was being published

And now HarperCollins is having her “sign” the books? What’s next, personalized copies?