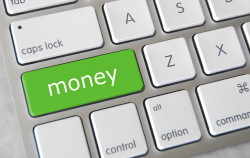 Over the past couple years the Author Earnings Report has become one of the leading studies of the ebook market. Its quarterly report on the Kindle Store on Amazon.com offers a unique snapshot of the world’s largest global ebookstore, and now the pseudonymous Data Guy and his horde of algorithms, spiders, bots have turned their attention to a second branch of the Kindle store: Amazon.co.uk.

The UK is far from the largest book market in the world; in fact, it is estimated to rank 5th behind US, China, Germany, and Japan. But in terms of ebooks, the UK has benefited from being the first country with a local Kindle Store, making the United Kingdom currently the world’s second largest market for digital books.

And since Amazon dominates the UK ebook market just like the US ebook market, that makes Amazon.co.uk the second largest retailer of English-language ebooks in the world (until India takes off, that is).

So naturally we’re all curious to get a new perspective on that market.

The full report, which can be found on the Author Earnings website, looks at ebook pricing, market share by publisher class, the prevalence of ISBNs, and the overlap between the UK and US best-seller lists.

Here are a few of the more interesting details.

The report found, for example, that the Big Five claimed only a tiny share of the UK Kindle Store’s best-seller list, while still managing to sell ebooks all out of proportion:

As you can see, Amazon’s publishing imprints are having somewhat better luck in the UK than in the US (15% vs 13%), possibly due to the data being collected on 6 November, 5 days after Amazon gave away the November freebies.

In terms of price, the UK averaged a lower ebook price across most publisher types, but not for indie authors: 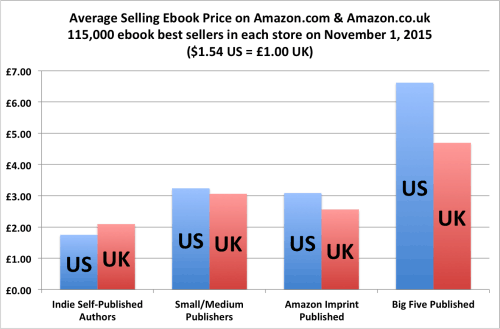 Two details worth noting is the higher priced indie ebooks, and the disparity in Big Five ebook prices in the US and the UK. Apparently the UK divisions of the Big Five aren’t following their US siblings into agency and ever increasing prices.

At this point the Big Five’s higher ebook prices in the US appears to be affecting its ebook market share, but it’s hard to say of the lower average price in the UK is having a net positive effect (I want another report from the UK before drawing any conclusions).

It’s too early to predict how the different pricing policies will affect the relative shares, but this is definitely a detail I will be watching for in the next report from the UK.

And that’s just a tithe of the report, which is too long to go into in a single blog post. You can find more information on the Author Earnings website.