The Bookseller has a report one of the more ridiculous aspects of UK copyright law:

A legal change made in 2013 to the Copyright, Designs & Patents Act (technically, the repeal of Section 52) is set to reinstate the full term of copyright protection (70 years) to 2D representations of 3D artistic works. Previously the duration of the term was 25 years. This means many images previously free to use would now incur fees, applying to any book stock sold or published after the legal change is implemented.

Now the government has changed the transition period for the new legislation to take effect from five years to six months, following a judicial review brought in the UK by three furniture manufacturers— US-based Knoll, Italy-based Cassina and Switzerland-based Vitra—with the clock ticking for publishers to comply by October 2016.

Leaving aside the issue of arbitrarily extending the copyright on existing works and the fundamental unfairness of the abrupt transition, did you catch the point about who owns the copyright?

So if you bought a designer chair, and wanted to publish a photo of said chair, you would have to pay a designer a fee for the “reproduction” of the chair.

Given that a photo cannot serve as a replacement for the object, I don’t see how it can be called a “reproduction”.

That’s just nuts, and if you disagree then I would like to invite you over next week so we can discuss it. I’ll serve a “reproduction” of dinner (photos of my lamb ragout are to die for).

Seriously, folks, this law is that absurd, and the abrupt change is going to hurt the book publishing industry.

“It’s had this terrible knock-on effect on publishers who publish 2D images of design objects,” said Natalie Kontarsky, associate director for legal and business affairs at Thames & Hudson. “The government has actually said ‘you are collateral damage’ in a very sanguine, offhand way. The dark end of the spectrum would be to take books out of circulation and have to pulp. Obviously no one wants to look at that. Licensing images retrospectively is likely to be a very expensive prospect—in terms of actual licence fees to rightsholders, working out who actually owns the rights and the cost of getting picture researchers involved and people like me on the legal side… It’s very complex.”

And sadly, this madness is spreading to the US.

This UK ruckus reminds me of a similar situation here in the US where a sculpture sued the USPS for using his work, the Korean War Memorial,  on a stamp. The sculptor argued that the photo used for the stamp infringed on the copyright of his original work, the statues. 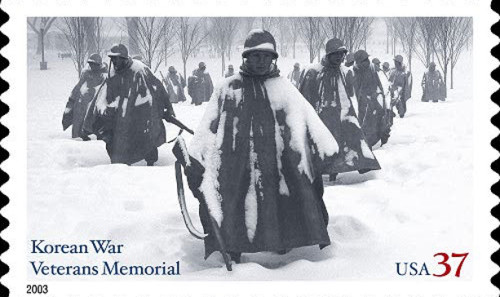 The argument sounds crazy on the face of it (the photo was obviously transformative, and this fair use). And while the district court judge ruled against the sculptor, his lawyers convinced the appeals court for the federal circuit to overrule the lower court (Techdirt):

The Federal Circuit has ruled on the appeal and stunningly decided that this isn’t fair use, claiming that it’s not, in fact, transformative. I’m somewhat amazed — as is law professor Peter Friedman in the post linked here. The two works are quite clearly extremely different, but the court felt that since they both were designed to honor soldiers killed in the Korean War, it couldn’t be seen as transformative. The fact that the photographer took hundreds of images before settling on this one apparently didn’t matter. On top of that, the fact that the snow totally changes the character of the image was dismissed by the court as being just “nature’s decision.”

And so thanks to a court, the US is encumbered with a copyright law very similar to the nonsense in the UK. Luckily for us, this hasn’t been codified into US law, so there’s a chance that the Supreme Court might inject some sanity into the situation.

Is it any wonder that so many of us have so little respect for copyright law?