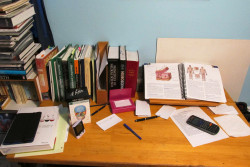 Having priced itself out of the college textbook market through three decades of horrendous price increases, Pearson is about to do the same to the library book market.

The Telegraph reports that academic libraries are up in arms over recent price increases.

A string of leading universities have stopped buying the FTSE 100 company’s teaching materials in a row over charges for ebooks, The Daily Telegraph has learned.Some top institutions, including Imperial College London, have gone so far as to seek to purge all Pearson materials from their courses, according to publishing industry sources.

The price hikes have prompted Britain’s leading academic library bodies, the Society of College, National and University Libraries (SCONUL) and Research Libraries UK, to write to Pearson chief executive John Fallon to appeal for a reverse in policy. The company’s UK higher education unit told universities in August that it would impose steep price rises, including some of more than 100-fold, on library purchases of their ebooks.

Pearson is trying to force universities to cut back on the number of copies bought by libraries and instead either have the academic departments buy the ebooks for the students or make the students buy the textbooks themselves.

Citing industry sources familiar with Pearson’s business, The Telegraph says that  the strategy is intended to the growing trend of students buying fewer traditional printed textbooks in favor of other sources.

But unfortunately for Pearson, digital textbook sales are not rising fast enough to match the decline of printed textbooks, nor will they.

What we have here is a publisher that has priced itself out of its market. Textbook prices are so high that students are forced to find cheaper alternatives.

Pearson is  sabotaging its own business model through high prices, and to make matters worse it doesn’t even realize what it’s doing. And yes, I do mean  sabotage, and in doing so Pearson is creating opportunities for disruption.

When I read the piece in The Telegraph, I was reminded of a comment left on a post I wrote on Saturday. William Ockham argued that publishers were too focused on book sales to notice that they were being disrupted by other markets and other industries:

My actual point is that the threats to Big Publishing aren’t coming from anything that has ‘book’ in the name. Ebooks are better than paper for narrative fiction. But non-fiction physical books are losing to hundreds of different things, but no individual change seems important. When was the last time you used a phone book, encyclopedia, or cookbook?

He’s right, and that is exactly what is happening right here.

Pearson has forgotten that a textbook is just one tool that students use learn. In addition to the free textbook initiatives at universities and offered by states and provinces, there’s also Khan Academy, free online tutorials, Youtube, MOOCs, and even markets where students can sell their notes to other students or get hired as tutors.

I mentioned one such market in a post I wrote back in October which explained why an annotated digital textbook wasn’t a panacea for publishers. A student wouldn’t annotate a digital textbook for further sale because:

That marketplace might not look like a competitor to Pearson, but it does ultimately serve the same purpose: to educate students.

So yes, it is a competitor, and yes it is one of the disruptions to the textbook market, and Pearson doesn’t see it coming. If they did then they wouldn’t have created opportunities by continuing to jack up textbook prices for so long, and they wouldn’t have expanded that error to the library market.

Your margin is my opportunity, as Jeff Bezos likes to say, and Pearson is selling textbooks with a heck of a margin.

And with stockholders to satisfy, true change isn’t going to happen any time soon.

Edit: Shortly after publishing this post I started to question my conclusion. What are the chances that Pearson is sabotaging textbooks in favor of its other divisions? It is an edtech company, after all.