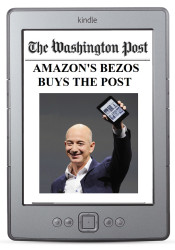 It’s been close to two and a half years since Jeff Bezos announced that he was buying the Washington Post, and much to the dismay of his detractors at the New York Times this venerable news org is doing better than ever.

The WSJ took a look at Bezos’ paper yesterday, and found it to be in a generally sound state.  While Bezos is known for taking the long view (“We are looking at the long term and not just for quick and temporary gains” said WaPo Publisher Fred Ryan), his focus on putting readers first is also proving to have an immediate benefit in the short term as well:

This year, the Post’s site has registered striking gains in traffic. In October, the Post passed its rival, the New York Times, in unique traffic for the first time. The next month it drew a record 71.6 million unique visitors, putting it right behind digital media giant BuzzFeed, according to comScore Inc. The November figure marks a nearly threefold increase in traffic since Mr. Bezos took over, and he recently boasted that the Post was on its way to becoming “the new paper of record.”

Much of the increase has coincided with an aggressive digital approach inspired by Mr. Bezos’ mandate to experiment. The website publishes an average of 1,200 pieces of content a day with increasing amounts geared toward social media. Recent examples include “15 awkward photos of world leaders that explain 2015” and a spoof video called “The Galactic Civil War” that tells the story of Star Wars as if it had been directed by documentarian Ken Burns.

The WSJ is choosing to focus on the lighter and fluffier content that many publishers are using to attract visitors from social networks, but that’s not the only way that the WaPo is attracting and keeping readers. 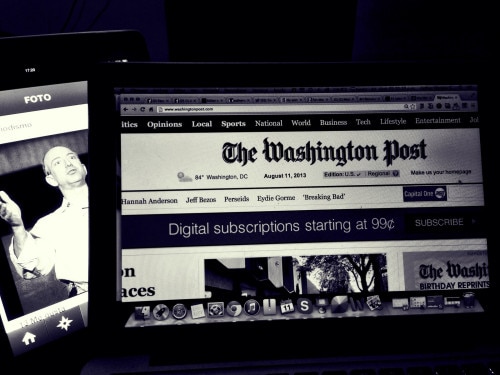 As you may recall, the WaPo has leveraged its filial relationship with Amazon to offer Fire tablet owners a free 6-month subscription. The WaPo isn’t saying how many new subscribers they’ve signed, but based on the reports on The Passive Voice the freebie offer is working as intended:

I would occasionally check out articles on the NYTimes but rarely WaPo. However after I got my free 6 months of WaPo I began reading it over breakfast on a daily basis– I get my local paper also, but just for the police blotter and obits. When my free subscription ended I let it go into a paid subscription. Giving away that free six months paid off with me.

These subscribers aren’t paying for the fluff; that can be found in unending quantity on Buzzfeed, etc. They keep coming back because of substantive reporting, and they’re a sign that the WaPo has solved the problem that plagues all news sites in the internet era: how to attract and keep readers without sacrificing quality.

And now that we know that Jeff Bezos can inject life and vitality into a news publisher, does anyone else want to see what would happen of Bezos bought his own book publisher and reformed it along the same lines?

Yes, Amazon has a book publishing division, but that’s not the same thing. Amazon’s publishing unit was built from scratch, but if Bezos bought a publisher it would come with existing infrastructure, business relationships, inertia, and corporate mindset.

Amazon’s publishing unit can be shunned and ignored as an outsider, but if Bezos revived a legacy book publisher then it would be harder to deny the accomplishment.