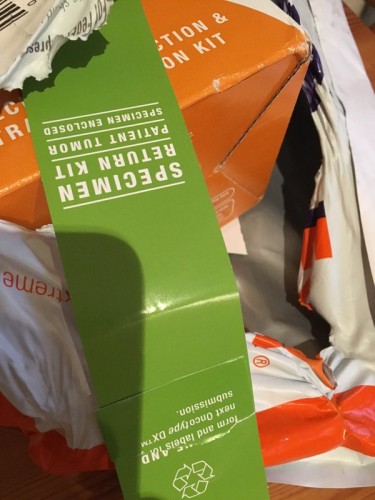 We’ve all heard horror stories about shipping snafus (I should tell you about the time I tried to ship a case of maraschino cherries) but this next tale takes the cake.

James Potten from Bristol, England, ordered a Kindle last week, but there was something wrong with the box when it arrived on Saturday. According to his tweet, Fedex somehow managed to swap two different packages destined for two completely different destinations:

You can see the image he tweeted at right.

FedEx still hasn’t explained what lead to their screw up, but BBC reports that the tumor had been shipped from an address in California and was intended to go to the Royal Free Hospital in London.

Needless to say, Potten was surprised to have received the tumor; no one expects to get cancer any more than they expect the Spanish Inquisition. And the hospital was also surprised, telling the BBC that it had learned that a package “intended for one of its institutions… was delivered to an address in Bristol”.

“If [we were] the intended recipient… we will await answers from the delivery company as to how this mistake was made,” it said.

The weird part is that the FedEx envelope had Potten’s name on the outside, but not the Kindle he ordered. So it’s not like FedEx dropped the package at the wrong location; a more serious snafu has occurred.

And to make matters worse, Potten had trouble getting FedEx to pick up the mislaid package. “I’ve been trying to get FedEx to collect it as it is potentially a sample that needs to be tested and sent back with some urgency,” he told the BBC on Sunday. “I don’t know where my Kindle is, but if it is at the Royal Free I’d be happy to do an exchange.”

After the story made the rounds of social media over the weekend, FedEx relieved Potten of the tumor on Sunday (now that is what I’d call one of the more unique non-traditional cures for tumors).