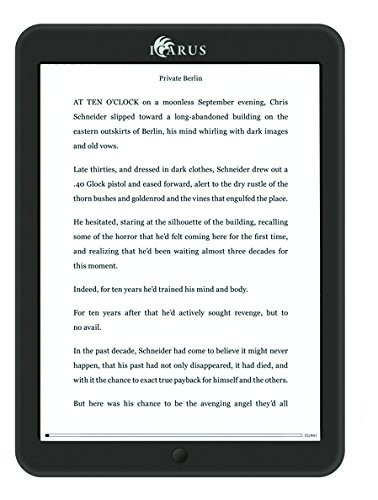 Following a partially successful Indiegogo campaign, Icarus started shipping their latest 8-inch ereader to customers last month, and they have now also started selling it through Amazon.com for $199.

The Illumina XL is an 8″ ereader that runs Android 4.2 Jelly Bean on a dual-core 1GHz CPU with 512MB RAM, 8GB internal storage, a microSD card slot, Wifi, and a headphone jack for audio.

It’s one of only a handful of 8″ ereaders to be released, and it’s one of an even smaller number of run Android on such a large epaper screen. Its 8″ screen has a relatively low resolution of 1024 x 768, and it has both a frontlight and a touchscreen.

Thanks to the high price tag there aren’t very many reviews yet, but if you head on over to MobileRead you will find a number of people who had bought one either through the Indiegogo campaign or direct from Icarus (one even posted a video).  The reviews are generally positive, although pretty much everyone agreed that the so-called “app store” bundled with the device was useless (you’ll need to use a trick like this to get apps).

It’s not a bad ereader, and it comes originally from a Chinese company, Boyue, that has been making Android ereaders for several years now. But those were all smaller models with 6″ screens. Based on some of the complaints about the frontlight, I think Boyue is still figuring out how to make a large-screen ereader:

I notice quite a bit of white bleeding along the left and the bottom border. Is mine the only one showing this or is this considered to be normal? And at the top, on an empty page, 7 or 8 small whitish clouds, of the size of a child’s fingernail, can be seen

There are other complaints which suggest that the Illumina XL’s frontlight is about as good as the one on the original Kindle Paperwhite.

But on the plus side, several users reported that you can install apps like the Kindle Android app.

So if you do get one, the versatility of the large screen plus Android should outweigh the disappointing frontlight.