The Jaq fuel cell charger from MyFC will let you charge your mobile devices using only salt water, but that convenience comes at a price.

Shown off last week at CES 2016, the Jaq is the second fuel cell based charger from this Swedish tech company. It builds on the tech developed for the PowerTrekk, a 100-euro charger that debuted in 2012, to offer a 1.8 Ah charge for your mobile device. 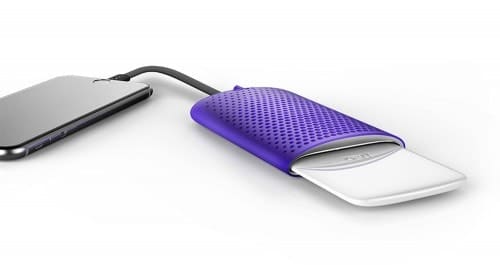 The Jaq is technically a proton exchange membrane fuel cell. In other words, it uses salt and water from a replaceable cartridge to generate electricity through a chemical reaction. Excess hydrogen atoms from the salt water chemically react with oxygen to produce enough power to charge an iPhone (as well as heat and water as waste products).

MyFC has been showing off the Jaq since last March, and the company hopes that the product will ship later this year. When they do ship the Jaq, MyFC plans to also offer a subscription plan where consumers would sign up to receive X number of cartridges each month (MyFC will also sell the cartridges singly, at $1.50 each).

MyFC is planning to sell a lot of cartridges because each cartridge is only good for a single use. That depletes their raw materials, after which they can be disposed of as regular waste.

On the upside, the cartridges should be able to be stored indefinitely (you can’t say that about single-use battery chargers) but the convenience of this fuel cell power supply still comes with a hefty downside.

So while this is a step in the right direction, I would suggest that a rechargeable battery pack, or a compact solar panel, is still the greener solution. They are bigger than the Jaq, but they have less waste.