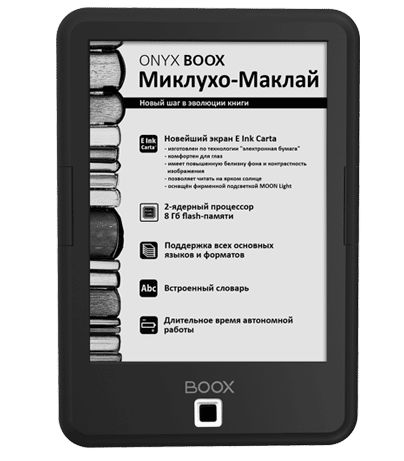 Onyx has launched another Android ereader this week in Russia, and it’s a good one.

The Onyx Boox Maclay runs Android 4.2 Jelly Bean on a dual-core CPU. It shares many specs with the Icarus Illumina XL I covered yesterday, only with a smaller screen and a much lower price tag.

The Maclay is now shipping in Russia with a price of 7890 rubles, or about $103 USD. That’s not a bad price given the OS and the Carta screen.

The Maclay has a 1GHz dual-core CPU, 512MB RAM, 8GB internal storage, a microSD card slot, and Wifi, but no Bluetooth or audio. Its six-inch display has a frontlight and touchscreen, and a screen resolution of 1024 x 758.

In terms of ebook formats, this ereader natively supports Epub, PDF, FB2, and other formats, and you can install your own app to expand support. The device also ships with pre-installed English-Russian and Russian-English dictionaries, with the possibility of adding dictionaries in StarDict format.

All in all, this is a pretty decent looking ereader with good specs and not a bad price. It has a lower resolution screen than the latest Kindle Paperwhite (which retails for 139 euros), but then again it is also somewhat cheaper in the Russian market.