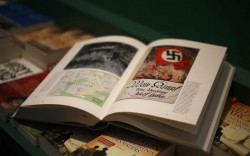 Both the works of Anne Frank and Adolf Hitler entered the public domain in much of Europe this year, and yet only one is widely available.

Writing over at The Conversation, Maaken Umbach informs us that the new critical edition of Hitler’s Mein Kampf is in short supply. While older editions are available on the Internet Archive and in ebookstores, the edition that everyone wants to buy is rarer than hen’s teeth:

This has obviously caused some anxiety and, in an attempt to steer the way the German public engages with the text, the Institute for Contemporary History in Munich decided to launch a critical scholarly edition. It includes a long introduction and countless footnotes that point out the many flaws in Hitler’s arguments. As the editors have explained, their main aim was to foreground “what we can counterpose to Hitler’s innumerable assertions, lies and expressions of intent”.

The edition sold out before it even appeared on the shelves of bookstores. Many readers, including me, are still waiting for their copies. It seems that 15,000 advance orders were placed for a print run of just 4,000. The printers were overwhelmed and left unable to fulfil the requests of many frustrated customers.

It has also created a thriving black market. Copies are being traded at extortionate prices, well above the official €59.

So there’s a critical shortage of the two volume, 2,000-page print edition, and for some reason I don’t understand, there’s no ebook edition (not even on Amazon.de, where the print copies are going for 349 euros).

And that has me scratching my head.

Many in academic publishing have said that academic print publishing is dying, and it’s taking college bookstores with it to the grave (although I do know at least one indie author who would disagree). It’s gotten so bad that some university presses, including Ohio State University Press, Amherst College Press, ANU Press, Penn State Romance Studies, and De Gruyter Open, are giving up on the idea of selling their books and are instead releasing at least some titles under a license where the ebook is free to download.

Given that academic presses exist to publish works that have little market value, that is a sensible move (it supports the presses’ core goal of disseminating knowledge).

But apparently the Institute doesn’t see it that way. They’d rather leave academics scrambling than get with the modern times.