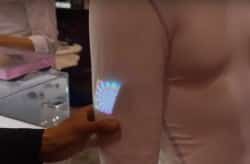 Integrating wearable displays like the promised Shiftwear sneakers into your clothing is still a lab project than a reality, and companies like Flexenable and Holst Centre are working to change that.

The following video shows a variety of flexible electronics, including a foil-backed LED screen mounted in a shirt sleeve. it’s not integrated into the cloth, but that could be a real possibility as research continues.

I know the demo doesn’t look like much (and the refresh conflict between the screen and the camera doesn’t help), just imagine what you could do with this one day. Rather than just wear a sponsor’s logo and be a billboard, an athlete could show a complete commercial and be a literal walking advertisement.

And on a more serious note, this tech teases the possibility of ereaders, tablets, and other mobile devices which are lighter and thinner than any product on the market. Unfortunately, those gadgets are probably years away from hitting store shelves.

Host Centre has been quietly working on flexible displays for several years now, and they demoed a similar display as a smartwatch concept back in 2013.

You won’t find their names on a product label, though. Holst Centre is an independent R&D center that develops technologies like wireless autonomous sensors and flexible electronics. Its business model is to partner with industry and academia to provide its technical expertise in the development of cutting edge tech and research projects.