We knew that the $50 Fire tablet was popular this past holiday season when it largely went out of stock on Amazon’s website, and according to the latest estimates from IDC the tablet was more successful than even Amazon’s wildest dreams.

Amazon shipped 5.2 million tablets in the fourth quarter (up from 1.9 million the previous year), boosting Amazon into third place in the global tablet market behind Apple, Samsung.

With 16.1 million and 9 million tablets shipped, Apple and Samsung continued to outsell Amazon, in spite of the Fire tablet’s low price and popularity. And even though both tech companies saw a drop in tablet sales last quarter, they will likely continue to outsell Amazon.

IDC cautioned in the press release this morning that Amazon isn’t likely to keep its position. “Amazon’s success in the tablet market has thus far been purely based on price,” the research firm says in a news release about the numbers. “While this bodes well during the holiday season, it’s unlikely the Kindle’s success will continue in the remainder of the year.”

I would say the success of the Fire tablet is due as much to marketing as price (also, decent hardware). At $50, the Fire tablet has a value which is hard to beat, and Amazon made sure everyone knew about it.

Also, Amazon’s hot tablet last year was the 6″ Fire HD6, which IDC doesn’t classify as a tablet. In short, Amazon’s success this year over last year is due almost as much to launching a device that IDC is willing to count a tablet as it is to actual sales. 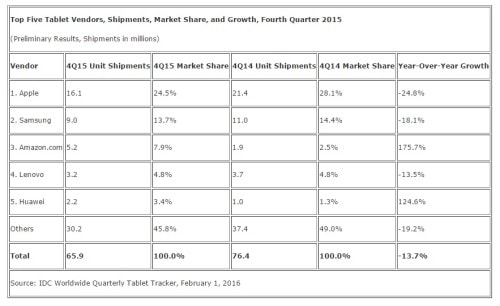 But if we look at the annual figures, we can see that IDC is mostly right about Amazon’s success being a one off in the 4th quarter, but also a fluke that won’t be repeated in the other three quarters.

Amazon didn’t even make the top five for the year, and that is true for most years. Amazon’s single best quarter for tablet sales is the 4th quarter, after which sales drop until the next model is launched. 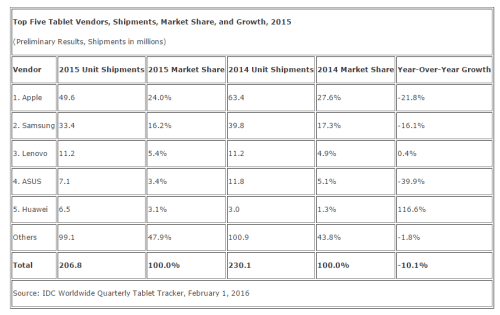