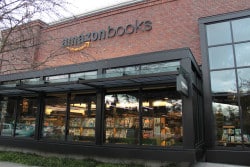 The rumor that Amazon was opening 300 to 400 bookstores lasted less than 24 hours before being retracted by the original source, but that was more than enough time for the tech blogosphere to pen a double dozen stories on, around, and about the rumor.

Here are the several best stories I found this evening.

To start, Longform weighed in this morning with an oblique commentary on yesterday’s rumor. It published its own linkpost titled The Longform Guide to Journalism Hoaxes, Pranks and Lies which rounded up seven old stories on journalistic hoaxes, frauds, and outright fabrications.

Re/code also weighed in with a tangential post that is rather light on the details but also hints that Amazon that Amazon has b&m plans beyond bookstores.

PW has the one most interesting story of the bunch; they found Amazon job openings in San Diego for booksellers, suggesting that Amazon has at least one store in the works.

The Dallas Morning News sought out the opinion of Half-Priced Books, the third-largest bookstore chain in the US. VP Kathy Doyle Thomas felt vindicated by the rumor, saying that “We’ve known for 44 years that people like to browse and shop bookstores”.

And last but not least Rich Bellis, formerly of DBW, writes over at Fast Company that “Amazon’s Rumored ‘Bookstores’ Probably Won’t Be What You Think”.

P.S. Even though this rumor proved to be false, it did shake loose a few new leaks which said that Amazon might be planning to open a dozen stores in the next couple years. That detail came from independent reports by Shelf Awareness and the NYTimes, and is based on confidential sources, but it is still more plausible than yesterday’s rumor.