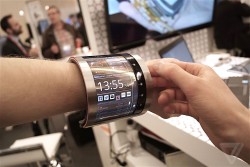 Over the past year FlexEnable (nee Plastic Logic) has been showing off increasingly sophisticated flexible E-ink, LCD, and AMOLED screens. And now The Verge reports that at MWC this week FlexEnable has is showing off a screen you can wrap around your wrist.

But they haven’t come up with a reason why you would want to.

The new FlexEnable demo unit features a massive OLCD (“O” for organic) mounted in a metal frame, and it can’t really do anything. It’s only semi-functional in that the screen works, but only to play a video which demos some of the ways you might use such a wearable.

The screen gets its flexibility from the plastic-backed transistors that Plastic Logic has been developing for the past decade. You can use them to wrap your electronics around any curve, and that includes screens. According to FlexEnable, an OLCD can achieve the same resolutions as regular LCD while using the same amount of power and improve upon regular LCD screens by curving to fit the surface behind it – a wrist, for example.

But why would you want to use this in a wearable? 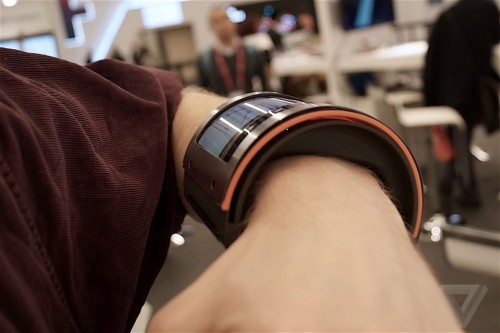 I’m not a huge fan of smartwatches, but that’s mainly because I can see the hype exceeding the actual usefulness (I also am indifferent to watches in general).

But they are small and pretty, while the FlexEnable demo unit, on the other hand, has a huge screen which can’t be viewed all at once. Its sheer size is going to tempt product developers to pack in a battery and electronics which would make this a massive shackle that is bound to be heavy on your wrist.

This is less a demo of what can be done than it is an explanation for why smartwatches have such small screens. This monstrosity is an example of what you shouldn’t do with a device on your wrist.

Sure, it’s the first wearable I’ve seen that you could realistically use to view office docs and read ebooks, but your arm is going to regret it.