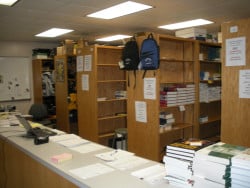 Once a de facto monopoly, college bookstores now have to contend with increased online competition and the resulting declining revenues. They also have the problem of publishers bypassing them to deal directly with students, and now those same publishers have found a new way to sabotage college bookstores.

A couple reports have crossed my desk this week concerning textbook shortages in college bookstores. The bookstores at the University of Montana and at Wheaton College in Illinois are having trouble keeping textbooks in stock.

It’s not so much that they are facing unprecedented demand for textbooks as that they can’t estimate the demand and can’t afford the financial hit from ordering too many textbooks:

English and Bible and theology classes, especially entry-level classes, are currently experiencing the most textbook shortages because of fluctuating enrollment and schedule changes.

So why doesn’t the bookstore just buy more books? “Full returns just don’t exist anymore,” Bentz said. “The return policies of publishers and wholesalers limit returns to 20 percent.” Because all money for ordering books comes from Wheaton College, returning overstocked textbooks would ultimately result in a loss of money for the college and an increase in prices for students in subsequent semesters.

The UM Bookstore has a similar problem:

Fifteen to 20 years ago, the UM Bookstore would receive the student capacity for a given class, as well as the number of students enrolled, well before the first week of classes. Those two numbers were always nearly the same, so the Bookstore could make accurate book orders. If those numbers weren’t available, they could make an estimate based on the number of students who bought books for the class the previous semester. Additionally, it was more feasible to return books that weren’t purchased than it is today.

“Today, students register for classes later, and the number doesn’t always match up with the class capacity, which makes it more difficult to predict,” Aliri said. “In the case of many publishing companies, we can only return 10% of the original textbook order. At one point, we had $100,000 of non-returnable inventory.”

To be clear, these are the only two reports I have found where college bookstores failed so badly that the textbook shortage situation came to the attention of student newspapers, but they’re almost certainly not the only college bookstores caught between a rock and a hard place.

And both reports describe this as a new phenomenon.

The stores run by B&N and Follett are likely immune to the returns issue (each company has its own warehouses), but even those stores have a problem with matching textbook orders to enrollment. Nationally, about 65%  of students won’t buy the required book for at least one of their classes, and they’re not buying them from bookstores. According to the Montana Kaiman, only 55% of those who purchase textbooks buy from the UM Bookstore; the other half shop online.

Multiply that across the estimated 20 million college students in the US, and we begin to get the impression that college bookstores are in much the same state as retail bookstores.

Neither is going to die out immediately, but they’re not nearly as healthy as they were ten years ago.

In the case of college bookstores, they’ll always have a lock on impulse purchases, but planned purchases like textbooks are moving online. Students are extremely price-sensitive, and if they can get a lower price online then they will do so.

And that’s good news for Amazon (as well as its competitors like eCampus). Amazon now has five “unstore” pickup locations on or near US universities, and they also have most of the rest of the schools covered by delivery lockers. Some of those lockers are located on campus, but an even larger number are located just off of college campuses (7-Eleven stores, for example).

But it’s not so good for all of Amazon’s competitors. B&N Education, for example, finds its revenues limited by the pool of financially-strapped students who are increasingly shopping online. (If you were wondering why B&N spun off B&N Education last year, I think we have the answer.)

B&N Education  responded to the online threat by adopting a price-matching policy where students can get the best price on their textbooks, but that is less a solution to the problem than an acknowledgement that they’re losing revenue to their cheaper online competitors.

Follett has a similar policy in some of its stores, but again the only real way to compete with online retailers would be to lower all the prices to the point that students won’t need to check online (and that is probably not a financially viable solution).

While we’re on the topic of bookstores, was anyone else surprised to learn that publishers and distributors are limiting returns from college bookstores?

What are the chances that might spread to retail bookstore, which currently enjoy an almost unlimited option to return unsold books?