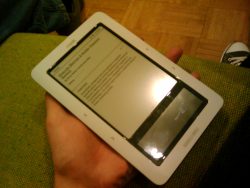 Barnes & Noble released its fiscal quarterly report today for the period ending on 30 January, and it looks like B&N’s plan to turn things around by selling pasta and tchotchkes still hasn’t worked.

Retail accounted for most of the decline, and was down 1.2% over all, but the Nook platform’s ongoing spiral to oblivion also hurt B&N’s bottom line:

NOOK sales of $51.7 million decreased 33.3% due primarily to lower device and content sales. NOOK EBITDA losses of $11.2 million declined $17.9 million versus the prior year as the company continues to focus on cost rationalization efforts.

Barnes & Noble is no longer breaking out the content vs hardware sales anymore for the Nook division, so it is difficult to say with any certainty that the Nook Store continues to be smaller than Kindle Unlimited.

Nevertheless, B&N is still pleased with the Nook results. 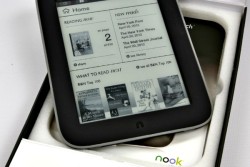 “We are pleased with our bookstore sales performance and the reduction of NOOK losses during the fiscal third quarter,” said Ron Boire, CEO of Barnes & Noble. “I am also pleased with the progress that has been made to reduce NOOK losses. We remain committed to providing a great digital reading experience to our customers, while exploring all opportunities to further reduce losses. Moving forward, our top priorities are growing bookstore and online sales, reducing Retail and NOOK expenses and growing our membership base.”

Did you catch the bit about keeping the Nook? I had been wondering whether B&N would close the division, or perhaps sell it , but apparently B&N is planning to keep the corpse in its parlor.

Given how the Nook revenues have declined, that’s no big loss, but it is also a sign that B&N is still standing around, trying to decide what to do next with digital. We’ve been waiting three years for B&N to figure that out, and in that time revenues have declined by over 90%, and the Nook division has been reduced to a fraction of what it was once worth.

B&N almost spun off the division in 2014, before deciding to keep it and spin the B&N college stores off by themselves. Given the decline that followed, that proved to be a bad choice for B&N but potentially a good move for the remaining Nook users.

With the Nook worth so little, it would now be possible for either Kobo or Google to pick it up for chump change and fold the tech into their existing platforms.

It almost makes you wonder why Kobo hasn’t bought them yet, doesn’t it?