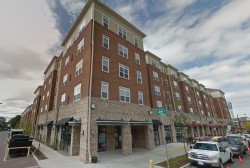 Amazon may only have a single bookstore (with a second one in the works in San Diego) but their non-retail brick-and-mortar efforts are growing by leaps and bounds.

On Friday Amazon announced that over the summer it will be opening a new unstore in Ohio, just off the campus of the University of Akron.

[email protected] will be located in a two thousand square foot space to the south of the university at 290 East Exchange Street, just across the street from the athletic fields. According to Google Maps, the space is in a relatively new mixed-use five-story building (shops on the first floor with apartments above).

It’s going to be surrounded by student housing, and it will be competing with University of Akron’s existing bookstore, which is run by B&N. The second Amazon pickup location in Ohio, [email protected] offers the UA community a convenient location to pick up and return Amazon orders, including virtually everything a student needs from college essentials to technology.

This is Amazon’s ninth announced pickup location, and the second one announced this week. A few days ago Amazon announced an unstore at UT Austin, and they also plan to open unstores at UC Davis and the University of Pennsylvania later this year.

“We are excited to bring [email protected] to the UA and greater Akron community,” said Ripley MacDonald, Director of Amazon Student Programs. “Whether students are ordering course materials, electronics or mac and cheese, [email protected] will provide a convenient and secure spot for them to pick up their stuff at hours that work with their schedules.”

Never have I wished I lived in a college town more than I do right now.