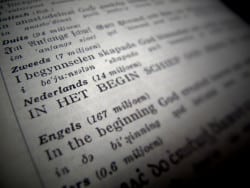 Google Translate is an awesomely wonderful tool which lets us read text in other languages. It’s built in to Chrome (which is why I stick with that browser), and accessible as a bookmarklet in other web browsers and via a webpage.

It’s a great tool, but it has a limitation: the browser version can’t translate text in an image. To name one example, if a product listing has a description embedded in an image, Google Translate can’t tell you what it says.

This is a problem for anyone who wants to follow tech news in other languages, but fortunately there is a workaround ( and I don’t mean have someone read it to you).

I have a trick which works, but before I tell you what it is I want to direct your attention to Project Naptha. This is a browser extension which is supposed to let you copy text out of images, and (if you’re lucky) translate the text. Project Naptha doesn’t work for me on Chrome but it might be a viable option for you and it is worth trying.

The mobile version of Google Translate has the ability to translate text in a photo taken with your camera, and if you don’t mind fiddling with your Android smartphone you can use that feature to translate the text in images you find on the web.

It’s not a simple process, but I have made it work. For example, I used this trick to find out information for the Kindle Oasis post this morning.

Update: Actually, it is a simple process. A reader has informed me that I was doing things the hard way. The easy way is to transfer the images to your mobile device, and then use the  Google Translate app to access the images and translate them.

You can open the images in the app by first selecting the camera option, and then selecting the gallery option. The app can pull images from local memory or Google Drive.

Next, install the Google Translate app from iTunes or Google Play on your mobile device D1, and run it.

Then, open the image you need to translate on your second device, D2. Make sure the image is clearly visible on the screen of D2. Finally, point D1’s camera at the screen of D2, and use the Google Translate app to take a photo.

And that is how I translated the product images I wrote about this morning.

All in all, this is not a convenient, efficient, or reliable way to translate text, but if you are desperate then it can be made to work.

But be prepared to have to tweak the process as you go along, and plan on taking several photos for each one you translate into text. It’s also not a fast process.

P.S. If you know of a better solution, please leave a comment. I need something better than this, and I’m not the only one.