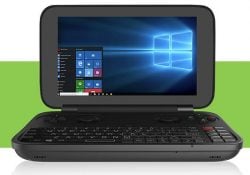 Around the turn of the millennium, HP and a few other PC makers were developing pocketable laptops like the Sharp Zauru SL-C760, HP 360LX, or NEC MobilePro 900C. The devices ran either a mobile version of Windows or Linux, and usually sported small keyboards with screens smaller than can be found on your average phablet.

That form factor fell out of favor about 2005 (although a handful of new models have been released over the years, including a gaming PC and  an Android convertible).

Now Chinese device maker GPD is making their bid to revive the handheld PC form factor with the WIN, a $300 HPC running Windows 10 on an Intel Z8500 CPU.

It also has a microSD card slot, USB and HDMI ports, a 6Ah battery, mic, speaker, and headphone jack as well as a tiny keyboard, double joysticks, and a d-pad: 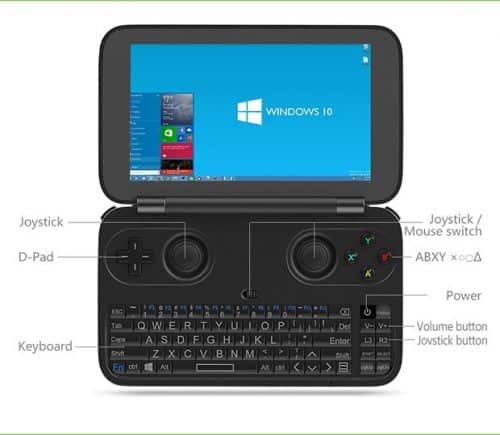 As you can see from the joysticks, the WIN is being targeted both as a gaming handheld and a PC (almost as if last year’s GPD XD had an affair with a Bluetooth keyboard), but there’a also already serious questions being raised about its gaming abilities.

One reviewer has documented problems with the WIN’s Cherry Trail CPU. It’s already been used in a number of small devices like the WIN, and they all share a problem with heat dissipation which causes the CPU to throttle itself down as it begins to overheat.

That’s going to be a problem when playing games, but less so when using the WIN for other PC uses, which means that this could be the new HPC some of us have been wanting ever since devices like the HP Jornada 720 started getting rare and expensive.

If the keyboard is usable, this could be a ideal take anywhere writing tool, it would kinda be a better version of the Freewrite, that $500, five-pound retro word processor which many have heard about but few have seen.

GDP is about 7 days away from finishing an Indiegogo campaign to fund the WIN, and they’ve already exceeded their goal by a factor of three, so this device is going to be made