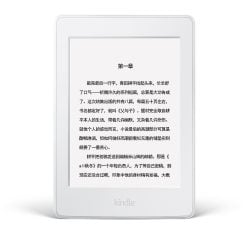 On Tuesday Amazon launched a new Kindle Paperwhite model in China and Japan. The new white Kindle Paperwhite sports the same 300 PPI screen, 4GB of storage, and battery life of the black model launched last year, only now with a new shell color.

The white Kindle Paperwhite is available today in Japan with a retail price of 14,280 yen, and it will be shipping next week in China and cost 958 yuan.

There’s no news yet on when it will be released in other markets, but if it follows the release pattern of the basic Kindle the new Paperwhite will likely be available in the UK and Europe later this year.

I wouldn’t expect to see it in the US or other western markets, however; Amazon is apparently adverse to the idea.

So what do you think of the new Kindle? I think it’s going to make the screen look gray, so I wouldn’t buy one, but a reader has pointed out that a white bezel can change the reading experience to the better:

My new reader has a white shell; my previous reader had a black one. To my surprise, reading with very narrow margins is now more comfortable than before: it’s as if the white shell is the margin of the page, and so a white shell makes the usable area of an E Ink screen larger.