What with the Sony DPT-S1 and Onyx Boox Max being the only two 13″ ereaders on the market (*), plus-sized models are rather thin on the ground. But soon we could have another option.

The Dutch ereader importer Icarus has launched a new crowd-funding campaign last week to finance the launch of the Icarus A4, what appears to be an Onyx Boox Max clone bearing the Icarus brand.

Like the Onyx Boox Max, the Icarus A4 sports a 13.3″ Mobius E-ink screen with an inductive touchscreen (stylus only) but no frontlight. It runs Android and comes with 1GB RAM and 16GB internal storage. It has Wifi, Bluetooth, a speaker, and a headphone jack.

It’s listed today for a minimum backing of $699. Contribute $759, and Icarus will also throw in a 6″ Illumina ereader.

So should you get one? If you need such a large document viewer and have $700 to spare, certainly. 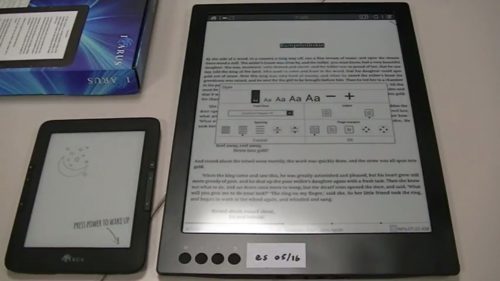 Icarus is a well-known brand in the ebook world. They have released close to a dozen ereaders over the past six years with screen ranging from 6″ to 8″ to 9.7″.

This maker even crowd-sourced an 8″ Android ereader last fall. That campaign did not reach its goals, but Icarus pushed through and launched the Illumina XL anyway, and according to what I read on MobileRead Icarus shipped the ereader to its backers.

And with this campaign, Icarus is funding a piece of hardware that the manufacturer is already producing and shipping to a couple different retailers. It runs Android and comes with Google Play, which means you should be able to expand its abilities by installing apps. And I have tried one, so I can say with confidence that the design is good.

The only real question I have today is whether Icarus will customize the software running on the A4. That’s what they’ve done with past ereaders, but I am waiting for Icarus to get back to me with confirmation or additional detail.

The Icarus A4 is up for pre-order today on IndieGogo, where Icarus hopes to raise $25,000 in order to “finalize the mass production ramp-up”.

The campaign was launched three days ago, and so far it only has the three backers. But with the campaign only just beginning to get its first press coverage today, Sunday, I am sure that will change quickly.