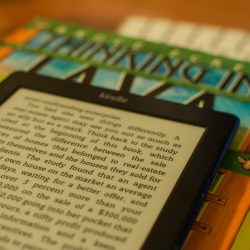 The ongoing Oracle v Google patent infringement spat is currently in week Nth of its retrial, and this week’s testimony is shedding new light on otherwise closely-held deals between Amazon and Oracle.

Yes, she said the Paperwhite almost ran Android, bBut I don’t know how much weight we should give this testimony:

“Amazon… had used Java to create [the Kindle] reader for many years,” she said. “Then they had another product called the Kindle Fire and that one they used Android. They didn’t license Java at that time.

“The way we look at different discounts and handle them with customers comes through an approval process that comes through me. I was made aware through that process that Amazon was going to [develop] the Kindle Fire with Android.

“They were now considering a new product called the Paperwhite and they were considering whether to use Java for that or Android.

“In order to compete with [Google], we ended up giving a 97.5 percent discount for the Paperwhite. Instead of what we would have historically offered them, because our competition was free, we had to offer them a cents on the dollar price.”

There’s a few problems with this testimony.

For one thing, Java is a programming language while Android is an operating system. It’s not clear from the testimony how one would be used to replace the other. Also, part of Android (including Android apps) is _written_ in Java, which is why this makes less and less sense as we get deeper into it.

Furthermore, I can see from my old notes from 2012 that the Paperwhite runs on the exact same software as its predecessor, the Kindle Touch: Linux, with a Java app for the reading app.

The only _Java_ part which could be replaced is that reading app, and that frankly was not a high probability. That app was originally developed for the first Kindle, every Kindle ereader since then have run later versions of that same app – including the Voyage, Oasis, $79 basic Kindle, and the current Paperwhite.

Catz is telling us that in 2012 Amazon was considering chucking over six years worth of work and replacing it with an Android app. Companies do that sometimes, yes, but not without a very good reason.

I can’t tell you whether Catz is obfuscating, doesn’t know what she’s talking about. or if perhaps Amazon tricked Oracle into discounting the Java license, but I do  know we should take this testimony less as historical fact than as eyewitness testimony (and you know how unreliable that can be).