There’s a story going around this weekend to the effect that the lawsuit Paramount filed against the indie Star Trek fan film Axanar “is going away”.

While that is great news (Anaxar looks to be a better Star Trek movie than Paramount’s SF movie) it’s still too early to celebrate the settlement.

ScreenRant, io9, and PCWorld have reported that JJ Abrams revealed at an official Paramount Star trek Fan event on Friday that the case was being settled.  Abrams said that Star Trek Beyond’s director, Justin Lin, was outraged at the legal situation:

“A few months back there was a fan film, Axonar, that was getting made and there was this lawsuit that happened between the studio and these fans and Justin, I’ll tell the story because he probably wouldn’t, was sort of outraged by this as a long time fan. We started talking about it and realized this was not an appropriate way to deal with the fans.

The fans should be celebrating this thing. Fans of Star Trek are part of this world. So he went to the studio and pushed them to stop this lawsuit and now, within the next few weeks, it will be announced this is going away, and that fans would be able to continue working on their project.”

You can watch a clip of Abrams remarks on Youtube.

It would be premature to celebrate based on that video, but CBS and Paramount have since confirmed that they are officially dropping their lawsuit. “We are pleased to confirm we are in settlement discussions and are also working on a set of fan film guidelines,” a Paramount spokesperson said in an email statement.

The official statement  from Axanar confirms the indeterminate state of the settlement. They too were shocked to hear Abrams’ cavalier declaration that the lawsuit is going away, and hours later they released this statement.

While we’re grateful to receive the public support of JJ Abrams and Justin Lin, as the lawsuit remains pending, we want to make sure we go through all the proper steps to make sure all matters are settled with CBS and Paramount. Our goal from the beginning of this legal matter has been to address the concerns of the plaintiffs in a way that still allows us to tell the story of AXANAR and meets the expectations of the over 10,000 fans who financially supported our project.

There is still a lot of work to do, but receiving this kind of public support helps immensely.

In other words, they are optimistic but have not uncorked the champagne. 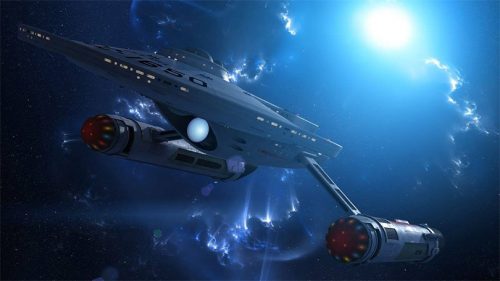 For those not familiar with the Axanar project, this film is set 20 years before Star Trek: TOS, during the war between the  Klingon Empire and the Federation. It was inspired by a historical reference in ST:TOS (the Battle of Axanar) and borrows heavily from the Star Trek universe (ship design, characters, and Klingon language and culture).

It’s not the first Star Trek fan film to be made (several even had semi-official approval from Paramount) but it was the first to be backed by $1.1 million from a pair of crowd-funding campaigns. And as you can see from the teaser it is also the first to have such high production values.

This is the first Star Trek fan film which looks like it could give the official movie a run for it money in terms of quality, fan enthusiasm, and critical acclaim, and that may or may not be why Paramount filed suit late last year.

There are reports that Paramount had come to an understanding with Axanar, but evidently Paramount didn’t see it that way. The studio filed suit in late December, and demanded $150,000 for each infringement.

Some of the alleged infringement, including the claims about the Klingon language, were utterly ridiculous, but the fact remains that it was obvious that elements like ship designs, uniforms, and the Klingons’ appearance had been lifted from Star Trek.

Heck, one of the actors (Gary Graham) in the trailer above even reprises a character (Soval) he had played in Star Trek Enterprise, and I recognize at least three more actors which had played other roles.

So yes, Axanar infringes on Paramount’s copyrights. That is indisputable.

But so is the fact that the lawsuit was immensely unpopular among Star Trek fans, many of whom felt that there was only one Star Trek film in the works, and that Paramount was killing it in favor of Paramount’s own SF/action flick.

That bad PR is what lead to the news about a settlement, and it’s why the deal might come to pass.

But I still would not celebrate just yet.

Paramount and Axanar might never be able to come to terms, and for all we know this might simply be a stalling action on the part of Paramount to build positive buzz for its SF/action flick. Once that movie is out of theaters, paramount might have another change of heart and refile the lawsuit.

We’ll have to wait and see.