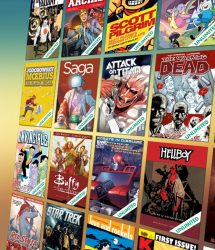 It was around this time last year that I predicted that Comixology would launch an all-you-read subscription comic book service.

Comixology announced on Tuesday that it is launching Comixology Unlimited, a $6 a month service which lets you read as many comic books as you like. It’s available through the Comixology app on Android and iOS, and comes with a free 30-day trial.

“We’re in a new golden age of storytelling with more incredible comics, graphic novels and manga than ever before,” said Comixology’s CEO and Co-Founder David Steinberger. “Comixology Unlimited is fantastic portal to tons of great comics at a ridiculously great price. Get in there and start exploring.”

Surprisingly, neither of the major comic book publishers (DC and Marvel) are participating in the offer; it is limited to just smaller publishers such as:

I would have expected Marvel to join; it has its own subscription service, the $10 Marvel Unlimited, but I guess Comixology wasn’t charging enough or paying enough to interest the Disney subsidiary.

So we are left with basically the same selection as ComicsFix, the competing service which launched in 2014. That service costs $9 a month, and according to its website it is on hiatus at the moment.

Speaking of competing services, Scribd offers digital comics in its much more limited $9 a month subscription plan, and Amazon’s Kindle Unlimited also has a small selection of comics.

It’s not clear how the Scribd and Comixology Unlimited catalogs compare, but the latter is more likely the better deal for comics lovers because it is unlimited.

Once again, Amazon has shown that it is the only company that can enter an ebook market, and dominate it.