It’s been some two weeks since I first raised the question as to whether some Kindle Oasis units had a defective connection with their battery case, and as new evidence comes in that question is becoming less a question than a known defect affecting a small number of Oasis owners. 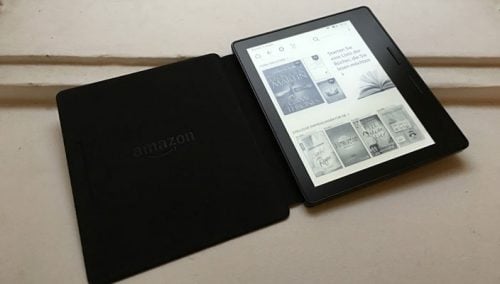 Over the past month numerous Kindle Oasis owners have reported that their $290 ereader was dying after only six eight, or ten hours of reading with the cover attached. They’re finding that their Oasis isn’t drawing power from the battery in the case like it’s supposed to.

For example, my loaned review unit died after three days of light reading. I know I had started from a full charge, and while I didn’t think to confirm the state of the case’s battery at the end of the three days I do know that I’ve never had a similar problem with the Paperwhite or other Kindles.

And I’m not the only one with this problem. There are several non-specific complaints about the battery life, and some reviewers have detailed exactly how their Oasis was failing to connect to its case.

“Also, clearly the magnetized connection between the device and the case is not perfect, because I constantly, at least several times a day, will get error messages saying that the device cannot connect to the case battery,” one owner wrote in a review. “This has resulted several times in my device just dying because it is out of power. I have literally never had that happen with a previous Kindle e-reader so it is rather amazing.”

Another reviewer chimed in with a similar complaint: “I assume this will be swapped out when I get time to work through customer service, but there is a problem with my Oasis. It regularly flashes a warning that it has lost connection with its charging cover. Sometimes this happens when the Oasis is just sitting on the table (ie, its not being carried/moved around).”

The Oasis connects to its battery case through a proprietary 5-pin connector. We’re still waiting on hackers to identify just what the connector does and what case can do, but from what some owners are saying it’s not nearly as smart as Amazon thought it was.

It does appear, however, that the case may have DRM: “Once I even got an error message that said I’d connected the Oasis to an unauthorized cover (it was in its own cover).”

I’m looking forward to getting that detail confirmed, but in the meantime it’s safe to say that Amazon has truly produced an “engineer’s Kindle”.

As the saying goes, a regular person believes that if it isn’t broken, don’t fix it. Engineers, on the other hand, believe that if something isn’t broken then it doesn’t have enough features.