It’s more or less Rotten Tomatoes clone, only for books. Book Marks aggregates reviews from more than 70 sources (newspapers, magazines, and websites) and averages them into a letter grade. 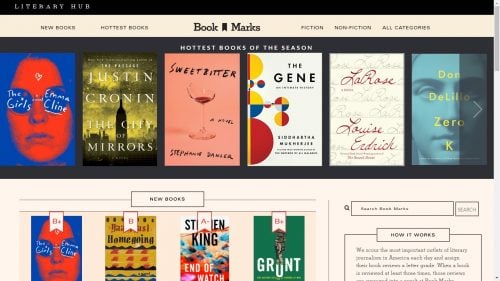 “We understand it is difficult to summarize the nuance and complexity of a review into a letter grade,” said Literary Hub Editor-in-Chief Jonny Diamond. “But we believe that Book Marks will lead more readers to reviews, and amplify critics’ voices in a way that benefits readers and writers alike.”

While online readers’ reviews create robust conversations about books and foster new and diverse book-loving communities, it is also valuable to read what professional critics have to say about a title. Book Marks will, as well as linking back to their source. Each book’s cumulative grade functions as both a general critical assessment, and, more significantly, as an introduction to a range of voices and opinions that make up the world of American literary criticism.

Book Marks is (at least) the second such aggregator in the book space. The first, iDreamBooks, launched several years ago. Sony was using iDreamBooks in its ebookstore, and at the time the site was aggregating reviews from both the major news sites as well as book blogs.

The latter sources appear to have been dropped from iDreamBooks at some point in the past several years, however.

Now iDreamBooks is using more or less the same sources as Book Marks, with one exception. BM’s FAQ mentions that it excludes trade reviews at the moment (the service focused on consumer reviews). Reviews from publications like Kirkus are included in iDreamBooks.

You can find a complete list of Book Marks’ sources on its site. As you can see, very few independent book blogs are included.