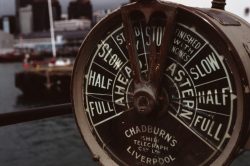 The NY Times has put forth the argument that the lowly period is going away.

They published an interview of David Crystal yesterday where he explained that when it comes to instant messaging, the period is now more notable for its presence than its absence.

The period — the full-stop signal we all learn as children, whose use stretches back at least to the Middle Ages — is gradually being felled in the barrage of instant messaging that has become synonymous with the digital age

So says David Crystal, who has written more than 100 books on language and is a former master of original pronunciation at Shakespeare’s Globe theater in London — a man who understands the power of tradition in language

In fact, the understated period — the punctuation equivalent of stagehands who dress in black to be less conspicuous — may have suddenly taken on meanings all its own<

Increasingly, says Professor Crystal, whose books include “Making a Point: The Persnickety Story of English Punctuation,” the period is being deployed as a weapon to show irony, syntactic snark, insincerity, even aggression

If the love of your life just canceled the candlelit, six-course, home-cooked dinner you have prepared, you are best advised to include a period when you respond “Fine.” to show annoyance

“Fine” or “Fine!,” in contrast, could denote acquiescence or blithe acceptance

“The period now has an emotional charge and has become an emoticon of sorts,” Professor Crystal said “In the 1990s the internet created an ethos of linguistic free love where breaking the rules was encouraged and punctuation was one of the ways this could be done”

So could this happen? Could the period come to a full stop?

As the NYTimes demonstrated in their article, you can’t remove full stops without replacing them with something else to show where one sentence ends and another begins.

That NYTimes piece used paragraph breaks in place of full stops, effectively making the end of the paragraph the end of a sentence. This trick worked okay for an article this one time, but it can’t work for longer works nor would it work in situations where you would need several successive sentences to express a complex thought.

In both situations, what we’re looking at is not a general trend but instead a response to unique pressures in specific environments. Screensnaps are used on Twitter because of its 140-character limit, and full stops are dropped on instant messages in order to save keystrokes on a smartphone’s touchscreen.

Those restrictions don’t apply outside of specific situations, so it would make little sense for a behavior to be repeated where it’s not required. And that goes double considering that something like dropping full stops is actually counter-productive in many situations like the article you are reading right now.