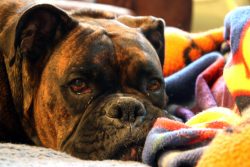 For the past three years or so pundits and the mainstream media have pointed to sales figures from groups like the AAP and proclaimed that the ebook apocalypse had failed to occur and that ebooks weren’t going to replace print.

Over the past year that recurring story has been recognized as a trope, and a false one at that. Even The Bookseller has acknowledged that data from the AAP did not represent the full market, and that presents a problem for anyone who wants to spin the topic as “ebooks are failing”.

Fortunately for the pundits, a new spin is just arriving on the scene. It was introduced on Friday by Publishers Weekly, and picked up by Flavorwire.

Preliminary figures from the Association of American Publishers found that sales of e-books for trade publishers fell 14% in 2015 compared to 2014 and accounted for 20% of overall trade book revenue, down from 23% in 2014. Going beyond AAP’s member publisher sales performance, the Codex Group’s April 2016 survey of 4,992 book buyers found that e-book units purchased as a share of total books purchased fell from 35.9% in April 2015 to 32.4% in April 2016. The Codex survey includes e-books published by traditional publishers and self-publishers and sold across all channels and in all categories.

In light of the April study results, Codex president Peter Hildick-Smith believes that the book industry’s experience with digital sales differs from that of music and video because of two factors. First, electronic devices are optional for reading books (unlike for listening to music or watching video), and the current range of e-book reading devices—including smartphones, tablets, and dedicated e-readers—has not delivered the quality long-form reading experience needed to supplant print, even with e-books’ major price and convenience advantages. Second, Hildick-Smith said, a new consumer phenomenon, “digital fatigue,” is beginning to emerge.

The piece then goes on to cite a blizzard of data about declining ereader ownership, before ending with this paragraph and a couple graphs:

Unless the e-reader device market is recharged with lower-price, higher-quality options, Hildick-Smith expects that consumers tiring of their digital-device experience will have further digital fatigue, leading to continued e-book sales erosion. 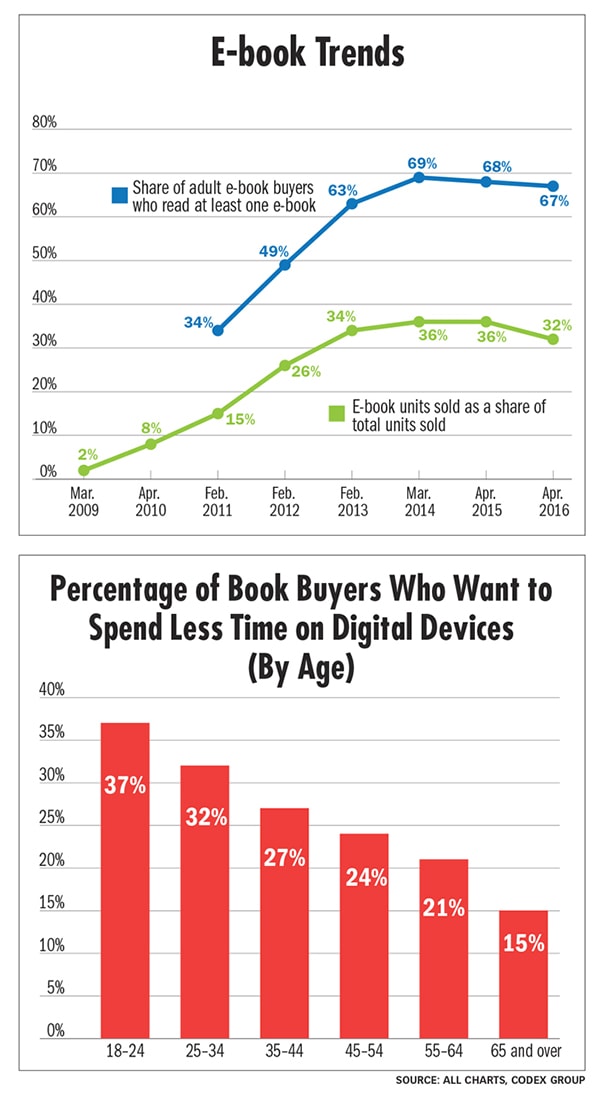 Coincidentally, Teleread covered the same story last month as part of their coverage of BEA 2016; they have a different selection of data from the same report from the Codex Group, but make no mention of  “digital fatigue” (otherwise I would have credited Teleread as the source of the spin).

And yes, I do think it’s spin. My problem with the claim of digital fatigue is that it is too convenient of a label. It fits with exactly how the Codex Group’s customers, legacy publishers (also PW’s customers), want to spin their declining ebook sales when it doesn’t really explain the larger demographic trends.

Are people reading fewer ebooks? According to other sources, yes. But is it due to digital fatigue?

The Codes Group says that fewer book buyers are reading ebooks, but when we look at the general population we see a very different picture. 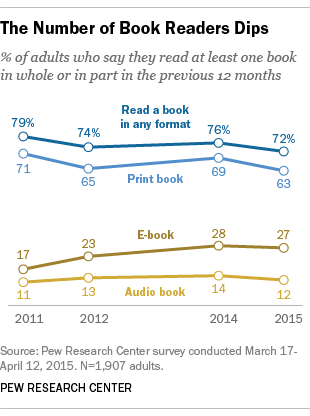 You can see the data in the chart at right.

If fewer people are reading fewer ebooks as a result of digital fatigue, then what’s your explanation for the fact they’re also reading fewer print books, and fewer books overall?

I don’t have one, myself, although I am looking forward to when Pew (hopefully) releases the next survey report this fall.

The obvious explanation would be that consumers are getting distracted by other activities, including digital activities on their mobile devices, and that goes against the idea of digital fatigue.

But it is a convenient label, which is why you’re going to hear it a lot over the next few months.