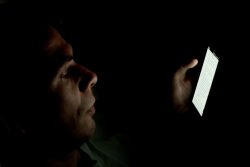 Do you know how your mom told you not to stare at a screen while sitting in a darkened room? Well, two smartphone owners have found an even worse way to misuse their mobile devices.

The Guardian has a report on an academic paper which details the experiences of two women who managed to blind themselves by using their smartphones late at night:

In Thursday’s New England Journal of Medicine, doctors detailed the cases of the two women, ages 22 and 40, who experienced “transient smartphone blindness” for months.

The women complained of recurring episodes of temporary vision loss for up to 15 minutes. They were subjected to variety of medical exams, MRI scans and heart tests. Yet doctors couldn’t find anything wrong with them to explain the problem.

But minutes after walking into an eye specialist’s office, the mystery was solved. “I simply asked them, ’What exactly were you doing when this happened?’” recalled Dr. Gordon Plant of Moorfield’s Eye Hospital in London. He explained that both women typically looked at their smartphones with only one eye while resting on their side in bed in the dark — their other eye was covered by the pillow.

The only surprising detail about this story is that they didn’t already know what would happen if you shined a bright light into one eye while keeping the other covered.

I did, but then again I also had an older sibling who would use this trick to temporarily blind and bewilder the younger children. (It wasn’t nice, no, but it was a learning experience.)