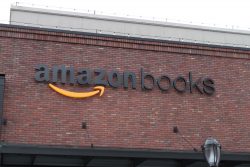 Here we were, planning to enjoy the 4th of July, when this story crossed my desk.

According to the NY Post, Amazon is planning to open a bookstore and cafe on the island of Manhattan:

Amazon Books is slated to open in Hudson Yards, the massive retail, commercial and residential space developed by Related Cos. and Oxford Properties Group, sources tell The Post.

“I don’t know if the final lease was signed yet, but I know the deal is happening,” one source said. “There’s no way that deal is dying.”

The Hudson Yards stores are projected to open in late 2018 or early 2019, a second source said.

This story is still an unconfirmed rumor at this point but it is not out of the question.

Located directly to the south of the Javits Convention Center, Hudson Yards is a large redevelopment project in Manhattan which will include both residential and commercial space (also public parks and a new subway station). The first building in this development opened in May of this year. New buildings will be opening as they are completed, with the last scheduled to open by 2023.

It will include the type of upscale retail which Amazon chose for its first bookstore, which opened late last year in Seattle, making it a plausible location for Amazon’s first east coast bookstore.

At this point the story is still an unconfirmed rumor; neither Amazon nor Hudson Yards are in their offices today so they can’t confirm it. Also, there are no job listings on Amazon’s website for a Manhattan bookstore. But if the story is true it will be Amazon’s fourth announced bookstore after Seattle, San Diego, and Portland, Oregon. (The possible store in Berlin is still only a tease, and not even a rumor.)

TBH, I was expecting Amazon to open a bookstore in Manhattan – only I had thought it would be located at the office building Amazon leased in 2014. The earliest rumors said Amazon would open a store there in 2014, but Amazon ultimately took the whole building for its NYC offices.

After the launch of the Seattle store, it seemed obvious that Amazon would also open a store in that building. But if this rumor is true, Amazon doesn’t see it that way.