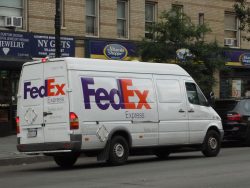 Ars Technica signed up to drive for Amazon’s outsourced delivery service a few days back, and their report identifies a couple fundamental problems with the so-called “sharing economy”.

Late last year, Amazon launched a pilot program in one of its biggest Amazon Prime Now markets to ship more packages within that service’s two-hour window. It was a “sharing economy”-styled system where anybody could sign up to deliver Amazon’s packages—and get paid $18 an hour while doing so, plus tips.

As independent contractors, Amazon Flex drivers are expected to cover all their own costs for driving, insurance, and wear-and-tear, and multiple Washington car insurance companies confirmed to Ars that interested drivers should look into business-driving insurance plans. Drivers in other participating Prime Now cities, which are up to 28 metropolitan areas in the United States, will want to check with their insurers for more information.

So not only do you pay Amazon extra for faster delivery, they also expect you to pay a second time in the form of tips. And to make matters worse, Amazon expects its workers to carry their own commercial insurance.

And they call this the “sharing economy”?

This is no more and no less than a ploy to pass overhead costs on to customers and workers in a ploy to boost Amazon’s bottom line, and in the long run, it’s going to fail.

As one commenter pointed out over at Ars, this is less a “sharing economy” than a  “unregulated subcontractor economy”. It exists in a legal loophole which, in the long run, will be closed by regulators.

All it would take is for regulators to require that a company verify that its contractors have commercial insurance. (Similar regulations require employers verify the employment status of their new employees.) That one change would make this type of part-time delivery gig unprofitable for most drivers, and more or less kill the industry.

And that is going to happen sooner rather than later.

Uber has gotten a lot of negative coverage over the past couple years, including for encouraging drivers to get personal insurance rather than commercial, and for misleading drivers on how they should register their vehicles.

The media isn’t the only one to notice those two sins; regulators have also noticed, and at some point they are going to act. So if you want to get a book delivered via the  “sharing economy”, you should follow up on that today.

Since I live in neither Arlington nor Springfield (the two closest Amazon Flex delivery areas) I cannot. But you might.

P.S. In 2014 B&N partnered with Google to deliver books and other good through Google Shopping Express in several US metro areas. Does anyone know whether that service is still available?