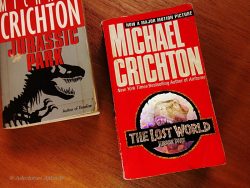 I wanted to address one of the stories in this morning’s link post.

Writing for Fusion, Shawn Taylor tries to argue that Hollywood (and the tv studios) is taking special care to ignore the works of Octavia Butler, a black SF author. While that is true to a degree (there is a racial bias in tv and movies, even in 2016), my problem with Taylor is that his premise stinks:

Here is a brief survey of the current field of science fiction adapted to film. Jules Vern over 140 adaptations. H.G. Wells? Over 80. Ray Bradbury and Richard Matheson have over 70 each. Mary Shelley has been adapted close to 60 times. Michael Crichton and Philip K. Dick, both in the 20s. We haven’t even gotten to Harlan Ellison, Isaac Asimov, Robert Heinlein or the rest of the old guard science fiction canon. What do they have in common? They are all white, and aside from Shelley, they are all male. While these authors aren’t telling the same story, their stories have similar themes, color and cultural palettes.

With all of the multiple adaptations of the aforementioned authors, why can’t Hollywood make any space for Octavia Estelle Butler? It boggles the mind that an author whose work is remarkably suited for film and television has been made to sit at the back of the science fiction adaptation bus.

I am no fan of the “white man saves the world” trope as exhibited by movies like World War Z and Interstellar, or the way Hollywood white-washes stories like The Last Airbender, Akira, or Ghost in the Shell, but Taylor’s examples still stink.

All of the authors he cites may be white, but that is about all they have in common. The reason their works were adapted was not that they are white.

I don’t know of any Asimov adaptations (the Will Smith movie doesn’t count) and of the three adapted Heinlein works only one (Predestination) is worth mentioning – and it didn’t come from Hollywood.

To put it simply, Taylor’s argument that Butler is being singly ignored is sloppy and poorly researched.

He should have made the argument that Matheson, Bradbury, Ellison, and Crichton each had the field tilted in their favor in ways denied to Butler because she was black and a woman.

That point would be hard to dispute, given Hollywood’s current and past demographics.

But to claim that all white authors have more access? That claim doesn’t stand up to scrutiny.