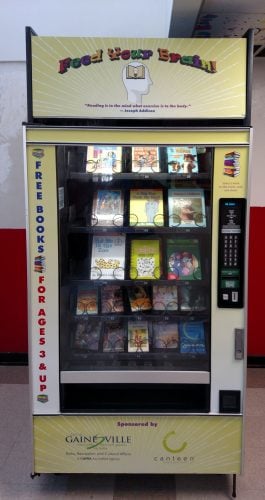 Little Free Libraries are small free-standing structures where the reading public can leave or take a book with no registration or library card required.

These volunteer-run libraries are often small, wooden purpose-built structures about the size of a breadbox, but some are built into repurposed objects like newspaper boxes, phone booths, refrigerators, or commercial vending machines.

The city of Gainesville just launched one such little free library. Last week its parks & rec dept installed a donated vending machine at the Porters Community Center. Launched as part of the “Feed Your Brain”,  the machine offers free, age-appropriate, new or gently-used books for children age three and older.

“When Kelly Jenson, one of our recreation aides, suggested the idea to other staff, it was contagious!” said Diane Latson-Harden, recreation leader. “The team set out to do the same in the Gainesville community.”

Yes, this is a converted vending machine, but when you get down to it this is still Little Free Libraries. It fits all the practical requirements of an LFL so it should be regarded as such.

I know some might focus on the size or the hardware, but that is irrelevant. What matters here are the free books and the ease of access. And books, it has.

The machine was donated by Canteen Vending Corp, a local vending machine supplier. Additionally, the company’s staff ran a book drive in late 2015 that netted several hundred books which were also donated  to the project.

The idea was inspired by similar projects in DC and Detroit which had received a lot of press. “Recreation staff learned about a similar program that was initiated in Washington, D.C., which aimed to serve underrepresented youth in the community by providing free books to increase reading skills,” said Shannon Keleher, recreation manager.

Three more little free libraries are scheduled to be installed over the next few months at rec centers and community centers in Gainesville, FL.