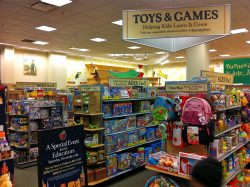 A story crossed my desk this morning which has me questioning B&N’s motivations.

Writing for Huffington Post, Kallen Diggs argues that indie authors should work more closely with indie bookstores because B&n was only interested in readers:

For most indie authors, Barnes & Noble can be their worst enemy. Why? Well, there are not very friendly. I only got a book signing there because of my publisher (Morgan James Publishing). Although, it was not worth my time there at all.

If I remember correctly, I sold 10 books during the book signing. Furthermore, you will be competing with the big name authors like Robert Kiyosaki, Jack Canfield, Stephen King, and J.K. Rowling.

I personally do not like competition, especially when they favor the big names over the indie authors. Often, these big name authors are getting their own shelf, which usually sit at the end of the aisle. With such a great placement, their book significantly stands out from the rest of the books.

It’s funny he should argue that B&N is attracting readers who want to hangout; as I recall B&N has a habit of removing all of its comfy chairs to discourage hanging out and so it could stock more pasta and 3d printers. And it’s hard to see B&N interested in attracting readers, not when their next four stores are going to be restaurants first and bookstores second.

But none of that really matters.

TBH the post I linked to reads less like a criticism of B&N than self-centered whining by an entitled author who did not get the access he wanted. And the fundamental problem with that complaint is that this author thinks Barnes & Noble has demonstrated a disinterest in authors when in reality he is one of tens of thousands of authors competing for a slice of B&N’s finite space and time.

It’s not B&N’s fault that he is one of many, many, many small fish in a very large pond.

That said, what do you think of Diggs’ recommendation that authors connect with indie bookstores?

On the one hand, it is of course a great opportunity for authors. On the other hand, authors are still competing for space in a finite number of stores.