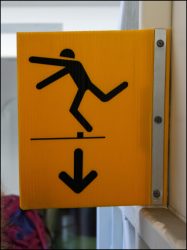 The most bizarre publishing lawsuit of the year has just gone on hiatus.

Earlier this year author Sheldon Blau filed a lawsuit against Simon & Schuster over the ebook rights to  his 1997 book How to Get Out of the Hospital Alive. Blau alleged that S&S had unlawfully released an ebook version even though the contract only covered the rights to a paper edition.

This lawsuit had all the makings of a massive class action suit over ebook royalties (on the point of licenses vs sales), and was widely reported that way, but as I pointed out back in May there was one small problem:

And today Blau’s lawyers admitted as much in court. From PW:

In a short notice filed in the Supreme Court of the State of New York, attorneys for Sheldon Blau, author of the 1997 book How to Get Out of the Hospital Alive, officially discontinued the action, which had accused S&S of incorrectly treating e-book transactions as sales rather than licenses.

But with S&S now off the hook, lawyers for Blau told PW on Tuesday morning that they are planning on filing suit against Wiley, although at press time that action was not yet filed.

And that’s that. This lawsuit had shown every sign of being as ridiculous as the suit filed in 2013 which alleged that Amazon was conspiring with major publishers to use DRM to lock small booksellers out of the ebook market. (That suit quickly thrown out.)

Could there be a real grounds for a lawsuit over ebook contracts, and whether publishers are mis-classifying an ebook license as a sale (and thus cheating authors out of royalties)? Maybe, but I wouldn’t expect Blau’s lawyers to file the suit, much less win it.

They couldn’t even file suit against the right publisher, and if they’re not smart enough to do basic research then how ever could they win the case?