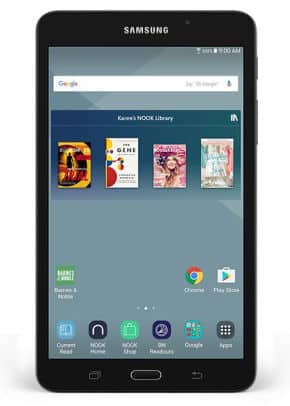 Barnes & Noble can’t commit to a CEO, but back in May it made a commitment to sell tens of millions of dollars worth of Samsung hardware every year. That deal included a rebranded Samsung Galaxy Tab A 7.0, which was planned to launch by the end of the year.

That tablet was released today.

The Samsung Galaxy Tab A Nook is smaller than the Galaxy Tab E Nook which B&N launched last October. The new tablet features a 7″ display, and runs Samsung’s version of Android 5.1 Lollipop on a quad-core 1.3GHz CPU.

It has 2 cameras (2MP, 5MP – no flash), 8GB internal storage, a microSD card slot, and an accelerometer. In terms of connectivity it has Wifi, Bluetooth, GPS, and Glomass.

This tablet will do little to reverse B&N’s declining digital revenues, so I really have to wonder why they would even bother. The again, this is only a $10 million a year commitment; with annual revenues of $4 billion, Barnes & Noble can afford the loss on a flagship tablet.