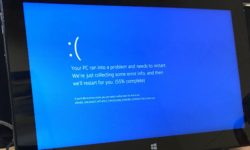 If you thought the bug in the Windows 10 anniversary update which broke everyone’s webcam was bad, you’re going to love this.

The Guardian is reporting what some Kindle owners noticed weeks ago, that a recent update to Windows 10 introduced a bug which causes the non-OS to crash when a Kindle is plugged in to the USB port.

“Just installed the anniversary update. All seemed to go well, jhowell reported on MobileRead. “But every time I connect my Kindle to a USB port”, the system crashed.

On Microsoft’s forums, Rick Hale said: “On Tuesday, I upgraded to the Anniversary Edition of Windows 10. Last night, for the first time since the upgrade, I mounted my Kindle by plugging it into a USB 2 port. I immediately got the blue screen with the QR code. I rebooted and tried several different times, even using a different USB cable, but that made no difference.”

There are reports that Windows won’t crash if the Kindle is plugged in before rebooting the system, but that doesn’t do much good for Kindle owners.

Fortunately, this problem should be fixed soon.

Windows 10 also recently had issues with recognizing Kobo ereaders. It didn’t crash, but it also couldn’t recognize that one had been plugged in to USB port. This bug prevented Kobo owners from transferring files from either Calibre or Kobo Desktop Reader.

That bug was fixed this week, so a fix for the Kindle issue should be coming in short order.