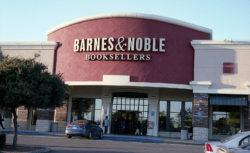 When B&N fired its CEO last month, we all knew that the first-quarter financial report would not be good.

Barnes & Noble report on Thursday that revenues for the first fiscal quarter totaled $914 million, down 6.6% from the same period last year. Retail sales fell 6.1% to $882 million for the quarter, while Nook revenues continued their downward spiral.

Nook revenues (including digital content and devices and accessories sales) declined 24.5% to $41 million for the first fiscal quarter. The division incurred an operating loss of $14.0 million, and its EBITDA losses were $7.9 million.

Retail incurred an operating loss of $7.4 million during the quarter, which includes severance charges and consulting fees of $7.9 million resulting from Retail’s cost reduction initiatives.  NOOK incurred an operating loss of $14.0 million, which includes severance and transitional costs of $7.2 million related to the previously announced outsourcing of certain NOOK services and the closure of its California and Taiwan offices.

Retail generated EBITDA of $17.6 million, inclusive of the Retail charges noted above.  Excluding the charges, Retail EBITDA would have been $25.5 million, a decline of $19.8 million versus the prior year, primarily as a result of the sales decrease.

NOOK EBITDA losses were $7.9 million, which includes the NOOK charges noted above.  Excluding the charges, NOOK EBITDA losses would have been $0.7 million, improving $16.6 million as compared to a year ago, due primarily to the Company’s cost rationalization efforts.

On a consolidated basis, the Company generated first quarter EBITDA of $9.6 million.  Excluding the charges noted above, consolidated EBITDA would have been $24.7 million, or $3.2 million lower than the prior year.

Outlook
The Company remains focused on executing its previously announced strategic initiatives to increase sales and reduce expenses.  Given the softer than expected sales results to date, and the expected continuation of the challenging retail environment, the Company now expects fiscal 2017 comparable store sales to decline in the low single digits.

image by THE Holy Hand Grenade!