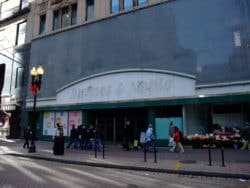 B&N released its first-quarter financial report today, and in the follow-up investor’s conference call Len Riggio had a few choice words to say about the state of the retail industry.

As our press releases and comments by Allen pointed out, the retailers arm is not good at this moment, in fact, it’s terrible. To better put, it is more than worse I have ever experienced in 50 years I have been in this industry. I believe the current trend can be traced precisely to the current election cycle, which is unprecedented in terms of the fear, anger and frustration being experienced by the public.

The preoccupation with this election is keeping them in home, glued to their TVs and at their desktops. Retail traffic by any measure and across all segments is close to a historic low point. I get this not from our own observations but in speaking to many of the CEOs of other retail companies.

Barnes & Noble’s real problem (one of them, anyway) is not the current elections but the fact that B&N is in a retail segment which has largely moved online and left B&N holding leases for retail space which is now too expensive to fill with books. (The other problem is mismanagement.)

This is a problem unique to bookselling and a few other retail segments which, as a matter of historical fact, are in decline and have been in decline for years as more and more sales move online.

It is not a new trend created by the 2016 presidential elections. That is why I sincerely hope that Riggio is lying to us, because if he is really that misinformed then Barnes & Noble is fucked.

If Riggio really believes that the current election cycle is responsible for B&N’s woes, god help us all. As a major shareholder he is in a unique position to run the company into the ground.

This would put tens of thousands out of work, leave hundreds of empty store fronts, and basically hand the US book market to Amazon.

Could someone do us all a favor and either talk some sense into Riggio, or failing that smother him in his sleep?