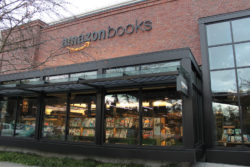 The objections to Amazon’s planned fourth bookstore in Chicago have moved from pompous protests to self-righteous attacks.

In a piece which you would swear was written for Salon.com rather than the Chicago Tribune, Mary Schmich attacked a certain type of Amazon customer last week as hypocrites.

The hypocrite is the person who loves, loves, loves independent bookstores, local boutiques and that family-run pet-supply shop that’s been on the corner forever.

The hypocrite knows that these native businesses are vital to making a neighborhood feel like home, and when another such enterprise dies from Amazonian competition, the hypocrite laments the disappearance of the small, the local, the clearly human.

On the other hand …

The hypocrite is busy, thrifty and a little lazy. Although she loves strolling by the independent bookstore, boutique or pet-supply shop — she may even step in to browse — she winds up buying lots of stuff from Amazon, despite reports of some dubious business practices.

She bemoans the death of what she loves while helping to kill it. Hypocrisy.

Most of us have a streak of shopping hypocrisy in us — I do — and I’ve been thinking about it since the news that Amazon, the Goliath of online booksellers, plans to open a brick-and-mortar store in Chicago.

I would think that insulting someone while trying to bring over to your side is ultimately a doomed tactic, but it is one which Salon.com has applied in the past (I was the only one to criticize, or even notice, the attack). So maybe this post will achieve its goal.

So tell me, are you an Amazon hypocrite?

As someone living in suburbia, I can safely deny the charge. I don’t have any quaint retail stores within a reasonable driving distance to bond with, much less abandon in favor of Amazon’s lower prices.