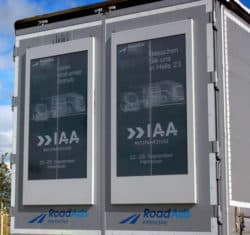 Visionect is a Slovenian company which develops new uses for E-ink screens.

They’ve developed bus signs, a smart meeting room sign, and a sign for museums, all of which utilize E-ink screens, but something tells me that their next product won’t have the same positive impact.

Earlier this week Visionect revealed their latest project: giant signs made out of E-ink screens which are designed to be mounted on the back of 18-wheelers. Developed by Mercedes-Benz and RoadAds Interactive, each sign is made of four 32″ E-ink screeens which are programmed to act a a single 5′ by 3″ display with a resolution of 2880 x 5120.

And yes, as you can see in the following video, they are designed to refresh while the truck is in motion in order to provide location-specific ads.

If this is not the worst idea for new ad tech ever, it has to be in the top ten. The tech may sound nifty but it looks like it is going to be incredibly distracting for other drivers.

As several commenters have pointed out on Gizmodo, this tech is bound to cause accidents; a giant E-ink screen refreshing on the truck in the next lane is just the thing to catch your eye and take your attention off of the road in front of you.

I am surprised this even got to the prototype stage, much less announced, without being canceled; the risks are just too high. But now that many people have pointed out the problems with this idea it will quietly be canceled before anyone gets killed.